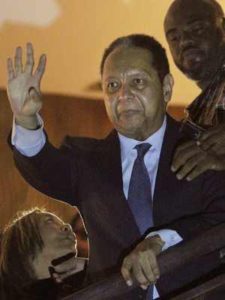 Jean-Claude Duvalier, once known as Haiti’s president-for-life, has made a surprising returned from exile.

The former dictator known as “Baby Doc” is in Port-au-Prince for the first time since he was deposed and forced to flee to Paris in 1986.

Duvalier landed at the Port-au-Prince airport Sunday night and was whisked out of the compound in a black Toyota SUV.

Haitian police on motorcycles surrounded his motorcade and pushed back hundreds of cheering supporters from the airport gates.

Duvalier was handed the presidency by his dying father, Francois “Papa Doc” Duvalier, in 1971. At the time Baby Doc was just 19. He ruled Haiti for 15 years with the help of his father’s Tonton Macoutes, hit-squads that killed off the Duvaliers’ rivals and sowed terror in the nation.

But at the airport on Sunday night, young men — many of whom weren’t even born when Baby Doc fled the country — praised the Duvalier period as a time of prosperity for Haiti.

Daverne Sanon, 24, says all of the exiled presidents should be allowed to return. He says Haiti has suffered the earthquake, cholera and the current president Rene Preval.

Amidst chanting for Jean-Claude Duvalier, Sanon says young people want to be able to go back to school.

“Since he left the country, we have no country,” says 35-year-old Marquis. “When he come back, we going to have an army and a country and the country going to be beautiful again, like way back since he left in 1986.”

Duvalier flew back into Haiti on an Air France flight from the Caribbean island of Guadeloupe. His long-time companion and publicist, Veronique Roy, arrived with him. Sources at the airport who saw him clear immigration say he was traveling on a red, Haitian diplomatic passport.

Duvalier arrives as Haiti is in the midst of another political crisis. Presidential elections in November disintegrated into chaos with 12 of the 19 candidates claiming there was massive fraud at the polls. Official results from the election still haven’t been released.  The second round of the race is in limbo and it appears that President Preval’s term will expire on Feb. 7 before a new head of state is chosen.

The Duvaliers’ 29 years in power was one of the most repressive periods in Haiti’s long troubled history.

In his book Haiti: The Tumultuous History — From Pearl of the Caribbean to Broken Nation, author Philippe Girard, summed up Papa and Baby Doc’s legacy in five words: “Charred bodies and swollen bellies.”

In an interview with NPR last week President Preval recounted a conversation he’d had with a US diplomat about the fate that so many other former Haitian presidents have suffered. He speaks at first through a translator.

“I said that for 25 years it’s not normal that no president was able to complete his term in Haiti. Except one. The one you are talking to,” he said.

Just three years ago, President Preval said that if Jean-Claude Duvalier returned from exile he could face criminal charges for murder and embezzling millions of dollars.

But on Sunday, Baby Doc returned to a hero’s welcome, he was given an entourage of Haitian National Police for security and he appeared briefly on the balcony of an upscale hotel as a free man waving to a mob of supporters and journalists below.

The young people, at the airport and hotel, have been told of the Duvalier years, by their parents and grandparent. Sort of an oral history as the older generation tells how things were. Jean Claude Duvalier was always popular with the majority of Haitians. He got at cross-purposes with Haiti’s business community  when he pressed for more economic responsibility.

Now all of that is gone and people recall Duvalier with fondness.

This is a natural tendency.