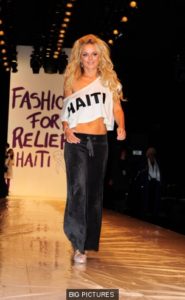 More than three dozen designers showed off their latest tropic-centric creations on a runway at Haiti Fashion Week, which ended Sunday. Visitors came from places as close as the neighboring Dominican Republic and as far as Japan.

“It was such a great, great experience to have Haitian designers all on the same runway,” said David Andre, a designer who owns a clothing store in Petionville and debuted his 2013 collection of resort wear for men and women. He hopes to see the event become an “annual rendezvous.”

Organizers say it’s the first time such that a fashion show of this scale has taken place in the Caribbean country, which is still slowly rebuilding from the 2010 earthquake that destroyed thousands of buildings and displaced more than a million people.

They also hope the event will show a different side to disaster-prone Haiti even as the country struggles to rebound from Hurricane Sandy and a storm last week that officials say killed up to 65 people.

Haitian designers like Andre are holding out hopes that international buyers will purchase pieces from their collections that were on display during the show’s conferences, workshops and booths.

It’s especially important that outside buyers take notice of the designs because the poverty in Haiti makes it difficult to secure customers, Andre said.

“The clientele I have (in Haiti) is very, very small, so that’s why I have to work much harder overseas,” said Andre, a seasoned designer who has displayed his collections in places like New York, Jamaica, Ecuador and the Dominican Republic.

The fashion show was organized by the Haitian Support Centre for the Promotion of Enterprise, the Haitian Network of Designers and the Ministry of Culture.

Haitian singers Emeline Michel and James Germain lent their voices to the show to give first-time visitors another aspect of Haitian culture.

Dominican designer Socrates McKinney said Haiti has “a very strong culture, and that in some sense has to be reflected in the fashion.”