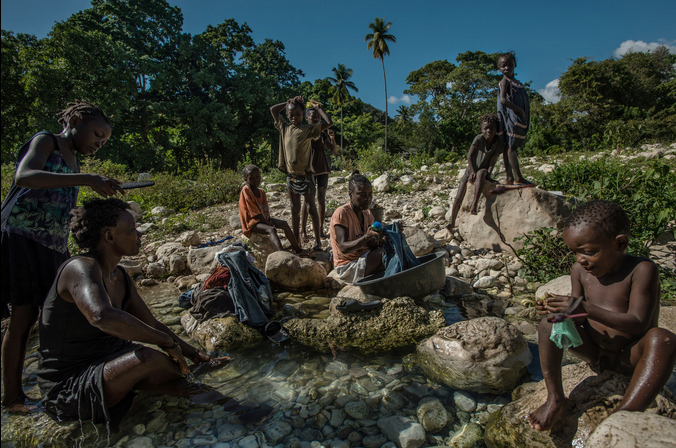 PARC CADEAU 2, Haiti — Along this arid strip of borderland, the river brings life. Its languid waters are used to cook the food, quench the thirst and bathe the bodies of thousands of Haitian migrants who have poured onto its banks from the Dominican Republic, fleeing threats of violence and deportation.

These days, the river also brings death. Horrid sanitation has led to a cholera outbreak in the camps, infecting and killing people who spilled over the border in recent months in hopes of finding refuge here.

Haitian officials have done almost nothing to support them. The population is scattered across the drought-racked southwest border, mostly barren plains. Families of eight sleep in tents fashioned from sticks and cardboard. They drink river water, struggle to find food, and make do without toilets or medical attention. 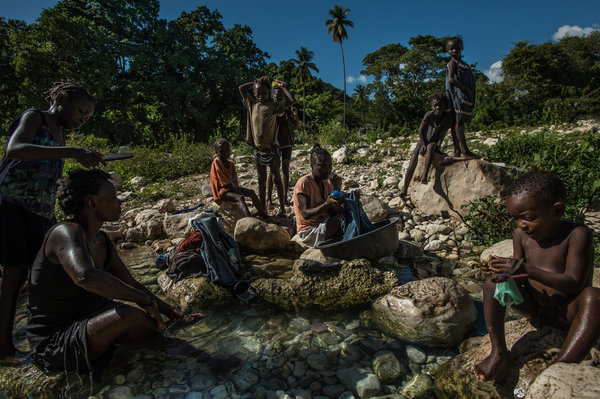 Families wash clothes in the river that runs by Tête à l’Eau, Haiti, where many who fled the Dominican Republic have settled. Credit Meridith Kohut for The New York Times

Now stateless, the refugees exist in the literal and figurative space between two nations that, along with their island, share a history steeped in hostility. Some of the camps were created decades ago, during another iteration of their troubled pasts, but had long since been abandoned. Now, in a new cycle of tension between the nations, they are packed to capacity once again.

The plight along the border is reminiscent, on a smaller scale, of the devastating 2010 earthquake, which claimed the lives of 100,000 to 316,000 Haitians and summoned a wave of billions of dollars in aid. Even today, more than 60,000 displaced people still reside in tent cities around the country.

Only this time, the upheaval is man-made, the result of the policies of the Dominican Republic and the seeming indifference of the Haitian government. The authorities in Haiti do not even formally recognize that the camps exist.

“I haven’t felt normal since my son died,” said David Toussaint, 55, whose 9-year-old boy was one of at least 10 people in the camps to die of cholera. Officials say more than 100 people have been infected.

He lifted himself from a bed his family built in their tent, covered with a frayed tarp. He spends his days there, immobilized by grief. An acrid smell filled the hot air as dust swirled into the tent, cloaking everything.

When the Dominican government announced that all migrants in the country illegally had to register this June, mass deportations were feared. Those later rounded up were taken largely from remote areas, and bused quietly to border crossings. In total, more than 10,000 people were expelled officially, with nearly another 10,000 people claiming to have been kicked out as well, according to the International Organization for Migration.

But in this climate of fear, an even bigger phenomenon emerged: Tens of thousands of people of Haitian descent decided to leave the Dominican Republic on their own, rather than risk deportation, including some who were born on Dominican soil and knew nothing of Haiti. 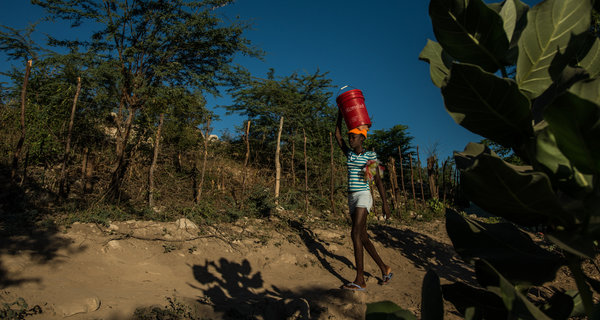 To choose hunger and squalor in the camps over the risk of staying in the Dominican Republic is, on the surface, a puzzling decision. But history looms large between the two countries. Dozens of Haitian refugees said that, when the law was announced, their neighbors began to intimidate them, threatening to burn down their homes and steal their animals.

For many Haitians who have lived in the Dominican Republic as laborers for generations, such threats are not idle. The mass murder of 9,000 to 20,000 Haitians ordered by the Dominican dictator Rafael Trujillo in 1937 remains etched in the minds of Haitians young and old.

In the current atmosphere, even outrageous threats gained traction.

“They said they would drop bombs on our homes,” said Milo Brevil, 38, as he built a new house in the blazing heat. His wife had just given birth in the camp. “When they said they would kill us, I departed with my family,” he said.

Biene Jemel, 28, and his two brothers said the same farmers they had worked for threatened to burn down their home if they did not leave.

All three men say they were born in the Dominican Republic, though like many Dominicans of Haitian descent, they have no proof of that aside from their language skills. Their Spanish is native, far better than their Creole. None of them speak French. The brothers are among a group of refugees who are, in essence, stateless, belonging to neither country but with nowhere else to go.

When Mr. Jemel fled, his children stayed behind with their mother, who was able to secure birth certificates for the children and documentation for herself. It has been six months since he has seen them, and he does not know when he will again.

“Imagine, it’s impossible for me to see my own kids,” he said, shaking his head. “I don’t belong here.” 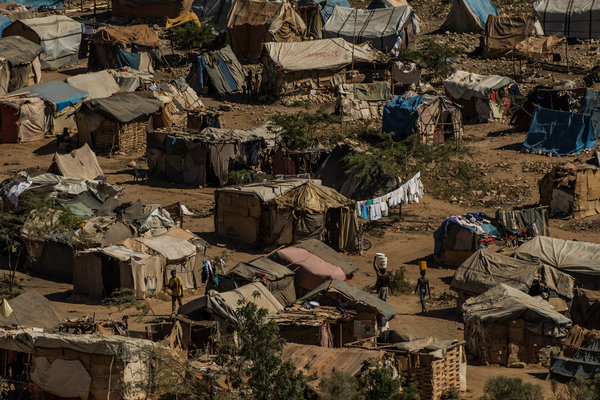 In Anse-à-Pitres, Haiti, thousands reside in camps of tents, having left the Dominican Republic by force or by fear after its government began a crackdown on illegal migrants. Poor sanitation has led to a cholera outbreak. Credit Meridith Kohut for The New York Times

There were dozens of others with similar stories, Dominican in every way but the one that mattered: paperwork. A few nodded in agreement. Many had begun the process of registering, waiting for months only to find out they did not have sufficient documentation, no formal birth record.

Few if any international donors have contributed during this crisis, in part because it is so much smaller than the earthquake was. And so far, cholera, which was brought to Haiti for the first time by United Nations peacekeeping forces, has been much less widespread than it was after the earthquake. The disease has now spread to the Dominican Republic, which is dealing with at least three confirmed cases of its own, officials said.

The Haitian government’s efforts here are hard to see. The first lady and prime minister both visited, handing out their aides’ cellphone numbers to community leaders. When they tried, the residents said, the numbers did not work.

The camp where the Jemel brothers have settled, Tête à l’Eau, is a testament to the many crosscurrents of history.

Ensconced in the mountains over the Pedernales River, it was a fully inhabited village some 30 years ago, and the thatched homes of that era still exist, as do the corrugated roofs and buildings of stone drawn from the riverbed.

During the 1980s, as tensions with the Dominican Republic flared, cross-border violence became common. The people of Tête à l’Eau, seized by fear, eventually fled. Some settled up the mountain, but no one remained.

Then, this past spring, Haitians began arriving once more, driven by the same impulse: a flight to safety. Houses long empty were dusted off. The families living above the valley, some of whom had fled the village decades before, welcomed the new arrivals. 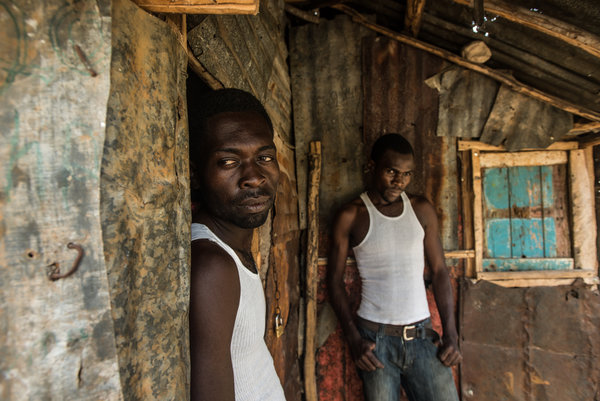 Biene Jemel, left, and his brother Albel Jermain Cherise, were born in the Dominican Republic. Credit Meridith Kohut for The New York Times

Borno Altino, 28, whose relatives fled the valley before he was born and moved higher into the mountains, sat along the dirt road that runs through the community, gossiping with residents.

“There’s not a lot of company up there,” he said, smiling.

The surge of refugees has breathed new life into the areas near Parc Cadeau 2. On Sundays, its church fills with people in their finest garments, belongings salvaged from past lives. Inside the facility, built from raw logs and thatched palm, followers fill the dry air with the Gospel, in French and Creole.

Eugene Toussaint and his wife moved to the area in 2002, frontier people determined to establish God’s word on the margins of society. They built a church and a school.

But few came. So they closed the school and continued praying with their tiny flock. And now tragedy has brought them a new one, and enough children to reopen the school.

Other migrants find refuge outside of the church. They make jokes, play dominoes. In one camp, residents converted an abandoned tent into a dance hall.

In another, Chrismon Gules, who has spent 12 of his 20 years in the Dominican Republic, has fashioned a guitar from an empty plastic jug, a hand-carved piece of wood, two wooden tuner pegs and a pair of corresponding metal wires.

His voice, airy and high-pitched, matches the folksy twang of the guitar. He draws a crowd when he plays.

More pressure on Haiti by the Dominican government, focused upon creating political and economic instability in Haiti.

In public, the Dominican authorities speak of friendship, and fairness. In fact, these same leaders force tens of thousands, from the DR into Haiti under some Draconian laws that see anyone born in the DR since 1929 as being “in transit.” This allows the forced deportation of something near 300,000.

Haiti is seeing many people dumped across the border who speak only Spanish and whose parents, and grandparents spoke Spanish before them.

The Haitian economy cannot support these new people and disaster, for them must follow.

We are witnessing the birth of a major human disaster.