There was welcome news yesterday that the US Agency for International Development will distribute 2,000 metric tons of emergency food in Haiti in the form of rice, green peas and cooking oil. This is in response to a food crisis that, along with fuel shortages, rampant inflation and public outrage at corruption, has galvanized two months of anti-government protests. The irony is that this emergency food is needed, at least in part, because of US food being sold to Haiti. I know that does not make sense at first reading, but it has to do with trade imbalance. 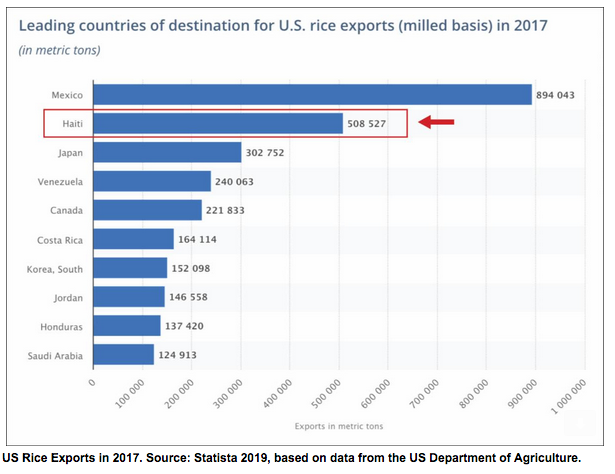 It is unquestionably a good thing that 2,000 tons of food, including rice, is being donated from the US to Haiti. At the same time it is important to note that Haiti purchases an average of 450,000 tons of rice each year from the US (the above graph shows it as over 500,000 for 2017). This makes Haiti the second largest market in the world for American rice, which in turn makes Haiti key to the health of the rice portion of the US agricultural export market. And this is at the expense of both the farmers and the economy of Haiti.
As recently as the mid-1980s, Haiti grew almost all the rice it consumed. Now it imports 85% of its rice, and all but a fraction of that is from the US. There are three main reasons for this. First, American rice farmers are heavily subsidized by US taxpayers ($600 million in 2018). Second, tariffs on rice coming into Haiti from the US are artificially low. Third, the infrastructure for enhancing local production, packaging and distribution of Haitian rice is decades out of date. Together these factors make Haitian-grown rice significantly more expensive than imported “Miami rice,” as it is known locally.
However, this is not just about rice. Haiti imports between 60 and 70 percent of all the food it consumes, making it particularly susceptible to a combination of inflation (imports become more expensive) and the reduced flow of those imports when ports do not function normally, as has been the case for weeks now.
To be sure, there are other factors contributing to Haiti’s food crisis. Trucks are hindered from transporting the food that does get through the ports. Stores are rarely open because of riots. There have been lower yields for domestic crops as a result of significantly lower seasonal rainfall earlier in the year. Farmers are having a hard time getting their produce to market, with so little fuel available and extensive roadblocks even when they can travel. However, the inescapable reality is that a reliance on imports has resulted in a lack of food security in a country with a disproportionate number of farmers.
When people ask what they can do to help in the aftermath of the current crisis, my suggestion is to be prepared to make agriculture a priority once rebuilding is underway. Make your donations count and your voices heard by supporting long term strategic investment in training smallholder farmers, rebuilding rural infrastructure, supporting climate-smart crop research, ensuring gender equality in agriculture, and generally helping Haiti to develop the capacity to feed itself.
Regards,
Hugh Locke