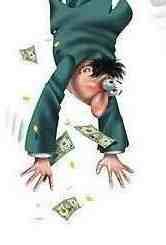 The OCHA Haiti Flooding Situation Report covering the period from June 6-7 does not paint a pretty picture. This grim report was to be anticipated given the lack of sanitation infrastructure and substantial reconstruction efforts in Haiti during the seventeen months since the January 2010 earthquake that devastated Port-au-Prince and surrounding rural areas. Last week severe flooding engulfed parts of Haiti as a tropical wave produced heavy rainfall and mudslides in Port-au-Prince, causing the Artibonite River to breach its banks and consequently flood the Grande Saline commune in northwestern Haiti.

Just as Mark Twain’s Tom Sawyer tricked the neighborhood boys into paying him to do his work, so have aid agencies funded by U.S. Agency for International Development (USAID) tricked donors into paying for the whitewashing of Haiti. Instead of suffering punishment for his transgressions, Tom Sawyer got rich by convincing others that whitewashing his Aunt Polly’s rotting fence was glamorous work — so glamorous that they were willing to pay Tom for the opportunity to work, while Tom sat back and collected the spoils. Now Mother Nature and the dispassionate entity known as cholera are slowly exposing the rot and neglect that no amount of public relations, false reporting and outright lying can hide. The whitewash is flowing into rivers already contaminated with cholera, the rains are just beginning, and many of the non-profit organizations are gone.

OCHA reports that 28 people died, 6 have been injured and 6 are still missing in Haiti. The West department, including the Port-au-Prince metropolitan area, has the highest fatality rate with 22 deaths from just this one rain incident. Certainly, this is a troubling number, but the background is worse.

OCHA assessed 213 vulnerable relocation camps by telephone between June 6 and 7, and teams were sent to 91 of the camps by the International Organization of Migration (IOM). This is called ground-truthing. It is not theory, hypothesis or a numbers game. It is hard work and it is done on site. Ten camps were severely flooded, and 29 vulnerable camps have more than 1,000 “households,” meaning immediate and extended families. 200 tents were distributed to the 1,000 households, while “water canals near camps are blocked and need to be cleared to prevent further flooding and landslides,” OCHA says. Additional tents and tarps “are urgently needed.” Aquatabs, jerricans, rakes and wheelbarrows are the first line of defense, and camp residents do not have these items. Latrines and showers are damaged, fecal matter is running in rivulets through the camps, and in the worst possible scenario, chorine levels in water distribution systems are running low or are non-existent. Due to a lack of latrines and showers in Grande Saline in the Artibonite department, the people are using water canals.

Last February, OCHA and local officials including the Mayor of Port de Paix warned of this scenario as relief agencies packed up their flags and tents and left the town with no backups for clean water or Cholera Treatment Centers (CTC). Several partners are about to wind down their chlorination operations because of a lack of funding or to focus on longer-term strategies. MSF-Belgium and Oxfam-GB have announced they will stop on 1 March the chlorination of 11 wells in Port-au-Prince that provide water for approximately 374,500 people. These two NGOs intend to hand over those activities to DINEPA throughout the month of February. Oxfam GB will stop its WASH activities in temporary housing sites on 15 February and is defining its strategy for the next three years with a focus on Cap Haitien.

Now OCHA reports that the CTC of Baradères in the Nippes department has run out of money.

As a result, the 27 staff members have not been paid since February and are threatening to go on strike. Under-reporting of cholera cases in the South department remains an issue. Drouin UTC in Grande Saline commune has been cut off by flooding and can only provide medical assistance to cholera patients in the immediate vicinity.

Cholera is returning with the rains, after initially spreading throughout the water supply in Haiti after the United Nations (MINUSTAH) Nepalese Camp in Mirebalais contaminated the Artibonite river system by flushing cholera contaminated feces into the Meye River.

As Haiti Grassroots member, Jane Regan, suggested in an blog post published on the Huffington Post after the initial outbreak, “But despite the suffering, the deaths, the one million refugees living in tents, there is not much colère (French for ‘anger’) against cholera. (Both words are from the same root — the Greek kholḗ which means ‘bile.’)”

How bad is cholera now, as the rains begin?

The current cholera outbreak in the Carrefour area is far worse than the one registered in November. At that time, there were a maximum of 900 reported cases of cholera per week. Now, over 300 new cases are registered every single day. However, the number of casualties is far lower than we saw in November as people are able to get help faster.
The first cases of this new outbreak originated in a community South of Port-au-Prince, in a mountainous area, near a river. This area lacks access to sanitary facilities and there is very little available drinking water. The arrival of the heavy rains last week facilitated the spread of the bacteria into the local water sources, which may have caused the spread of the bacteria.

HaitiLibre quotes Dr. Gabriel Timothée, Director General of the Ministry of Public Health and Population (MSPP), who says “There is a resurgence of cholera caused by runoff water of the rainy season, but also by a slackening in the observance of hygiene rules.”

That may be true, but how can the population observe “hygiene rules” when there is no soap, no clean water, and not enough chlorine to decontaminate water distribution systems.

Haiti Libre also takes Director General Timothée and the MSPP to task for under reporting the number of cholera cases, saying the MSPP is “not telling the whole truth to the people.”

OCHA supports the fact that the withdrawal of NGOs has created a serious gap.

The recent surge in new cholera cases reported in the commune of Thiotte (Southeast department) highlights the need for more vigilance in that area, particularly given the fact that the fatality rates in that department are still the highest, nationwide. With the effective or planned withdrawal of most international NGOs, the local health structures still do not have enough capacity to face the challenges of a sudden outbreak of new cholera cases, anticipated especially with the upcoming rainy season.

Since the beginning of the cholera epidemic in Haiti on October 19, 2010, 314,539 people were infected and treated, 168,492 people were hospitalized and 5,332 people died. This is according to the latest report from the Ministry of Public Health and Population (MSPP). OCHA disputes this figure and puts the number of infections at 400,000. How is this happening? Where is the evidence of reconstruction? There is a new report published by Haiti Grassroots Watch, and it offers a much clearer picture than the bits and pieces we get filtered through the whitewashing of aid agencies.

Two new investigations by Haiti Grassroots Watch and students from the Laboratoire de Journalisme at the State University of Haiti tried to figure out what is blocking the reconstruction of downtown, and why the Champ de Mars is still home to thousands of families. Journalists found a lack of transparency, lack of coordination, rivalry and sometimes even outright disagreement, in a context where no single authority seems to have a complete picture, or accept complete responsibility.The results of the impasse or – at the very least – confusion? Thousands of families braving the rains, winds and cholera under tarps and infrahuman conditions, undisbursed funding, and a rubble-strewn downtown characterized by empty plots and dying businesses.

It is well past the time for the international community, in coordination with the new Haitian government of Michel Martelly, to get down to the business of protecting the living. As Regan offered, we need some colère, and a real desire to provide infrastructure in Haiti.

Note: Haiti Grassroots Watch is a partnership of AlterPresse, the Society for the Animation of Social Communication (SAKS), the Network of Women Community Radio Broadcasters (REFRAKA) and the community radios of the Association of Haitian Community Media (AMEKA).