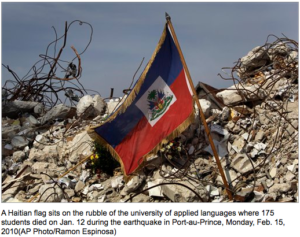 PORT-AU-PRINCE, Haiti — Hundreds of houses that survived Haiti’s killer quake still stand empty even as quake victims desperate for shelter crowd the streets. The reason is fear: Nobody is quite sure they can withstand another quake.

At least 54 aftershocks have shuddered through Haiti’s shattered capital since a Jan. 12 quake killed more than 200,000 people. They have toppled weakened buildings faster than demolition crews can get to them, sending up new clouds of choking dust. On Monday, three children were killed when a school collapsed in the northern city of Cap-Haitien. It wasn’t clear what caused the collapse, which occurred after a late-night tremor and heavy rains.

“I tried sleeping in the house for a night, but an aftershock came and I ran outside,” said Louise Lafonte, 36, who beds down with her family of five in a tent beside her seemingly intact concrete house. “I’m not going inside until the ground calms down.”

That may be awhile. Seismologists say more, damaging aftershocks are likely and there’s even a chance of another large quake following quickly after the initial catastrophe in the capital of 3 million people.

In 1751, a large quake hit the island that Haiti shares with the Dominican Republic. About a month later, another one destroyed Port-au-Prince.

A magnitude-7.4 quake that killed more than 18,000 people in northwestern Turkey in 1999 was followed three months later by another of magnitude-7.2 only 100 kilometers (60 miles) from the initial epicenter.

“There are many other examples like that of two significant earthquakes following each other,” said Eric Calais, a geophysicist at Purdue University who said he warned the Haitian government two years ago that the country was vulnerable to a major quake.

The prospect of another quake is on the minds of planners trying to rebuild the country and on those trying to prevent more deaths.

U.N. inspectors have advised people to stay away from dozens of structures. On Jan. 26, four people were trapped when a building collapsed on them, and on Feb. 9, a magnitude-4.0 aftershock shook loose debris at a shattered supermarket, trapping several more.

“One of the problems with aftershocks is that lot of buildings are already damaged, so aftershocks can punch above their weight,” said Brian Baptie, a seismologist with the British Geological Survey in Edinburgh, Scotland.

Even Haiti’s President Rene Preval is scared to sleep inside. He said he was staying with friends until he could move to an earthquake-resistant structure. Days after the quake, he said he was considering sleeping in a tent.

“Like you, I am nervous to be under cement,” Preval said in an interview with AP Television News. “Nobody can say when exactly this fault will erupt again.”

On Monday, Canadian Prime Minister Stephen Harper said his country will spend up to $12 million to build Haiti’s government a temporary base to replace official buildings damaged in the quake.

Seismologists say Port-au-Prince was particularly vulnerable due to its population density and shoddy construction.

Haiti’s government on Sunday banned the use of quarry sand in structures, although it is not clear how it will enforce the ban. Engineers say the limestone quarry sand produces brittle concrete easily damaged by quakes.

At least 15 of the aftershocks near the original epicenter have registered at least magnitude-5.

Scientists say the impact of the quake last month may spread far wider.

A magnitude-5.8 earthquake struck off the Cayman Islands two days after the Haiti quake. Last week, a magnitude-5.4 quake jolted eastern Cuba. And Montserrat’s volcano, more than 1,000 kilometers (600 miles) to the east, shot ash some 15 kilometers (nine miles) into the sky during one of its most dramatic events since a 1997 eruption that drove away half the Caribbean island’s population.

“These events we’re seeing might be because of the passage of seismic waves — what we call dynamic triggering — that shake already damaged fault lines in places like Cuba,” Calais said. “The same type of thing could be happening in Montserrat, but it’s very difficult to tell.”

Last month’s earthquake occurred along the east-west Enriquillo Fault, where two pieces of earth’s crust slide by each other in opposite directions like a zipper. Surprisingly, aftershocks haven’t clustered on the Enriquillo, but along what appears to be a previously unidentified separate fault.

Arthur Lerner-Lam of the Lamont-Doherty Earth Observatory in New York said there is a heightened risk of quakes for some time because strong temblors force the Earth to rearrange itself.

Estimating where a major quake may strike is an imprecise science anywhere — and especially in Haiti, which lacks seismometers and has never logged histories of temblors.

That sort of historical record is critical for scientists like Calais, who is advising Haiti’s government and the U.N. and is trying to develop an earthquake hazard map that can be used to mitigate risks for the reconstruction effort.

“We’re half-blind when it comes to Haiti,” Calais said.

3 thoughts on “Fears of another quake become new Haiti boogeyman”