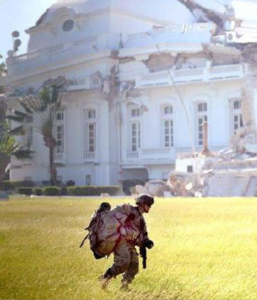 SOME SAY ZERO!!!  SOME SUGGEST A SUBSTANTIVE NEGATIVE FACTOR FOR THE HAITIAN ECONOMY AND SECURITY.

We have just been visited  by two nuns from downtown Port-au-Prince. They were looking for help since they know I am an American.  It seems as though  Preval’s gangs are breaking into homes and businesses.  They beat up the occupants and then steal whatever is of value. They then burn the buildings,  which might not seem to be unusual in Preval’s Haiti since all of the gangs are under his direct control.

However, these raids, rapes and pillages are observed by American soldiers who stand there and watch. They take no action. They voice no complaints. And for this disservice each $1.00 in us AID sees about $0.42  devoted to security – which means the cost of these do-nothing soldiers.

We wouldn’t be surprised to see MINUSTAH’s troops do this since some are directly involved in kidnapping, rape, robbery and other minor crimes.

As an ex-military type, I am shocked and disappointed.

Will these soldiers stand by when the poor people finally protest the lack of assistance and the fact that Preval has started charging the poor for water – free up till February 7th.

Unfortunately, I can see these soldiers moving to protect the criminal Preval government when the people voice legitimate complaints….reasoning that they must protect the concept of Democratic Continuity in which one duly (or unduly) elected person hands power to his successor…who might also be guilty of stealing the election.

Perhaps the American Ambassador Merten has told US troops to stand clear in another effort to endear himself to the Preval government.  The Ambassador has already claimed the relief effort is a success when it has not really done anything to alleviate the massive problems facing Haiti and its 9,000,000 people minus the 250,000 – 300,000 we last to the quake.

It is an insult to their memories.

Terrible accident in Petionville as a converted American school bus plows into street market.  18 people killed and dozens injured. Some trapped under the vehicle.

No medical facility in area to care for the injured.

What do you do with a child who has two broken legs, a wife with a broken back…….???

Tomorrow will mark first day of bizarre and inappropriate holiday declared by Preval as Carnival. Carnival is supposed to be a time to thank God for what we have. We have less than nothing. Ask the thousands camped under tents made of bed sheets in the football field, down the street, or the park in front of St. Pierre or the local golf course.

These people do not need a holiday. They are already on an enforced holiday – created by the quake that took everything they had. Some 250,000 are on a permanent holiday – in the cemetery.

The cynic Preval declared a holiday to irritate people and increase tensions as he and his wife, Elisabeth Delatour-Preval sit in the luxury of her home, sipping Barbancourt rum on the rocks..
or slurping beer out of a can which is the alcoholic Preval’s preferred method.

1530 hours
CAP HAITIEN
A school has collapsed as a result of an aftershock or is it a foreshock? Perhaps worse is yet to come.
Small children dead and injured……some trapped in rubble…

The aftershock today was a separate event- not an aftershock. It  was in the Dominican, and the one that happened Sunday was in the Virgin islands, and a third was off the coast of Cuba. These were resulting from slipping in a second fault line, different than the one that caused the January Earthquakes.
The one in the Domincan Republic was around Las Galeras on the North coast. That is the other fault line to the North of Hispaniola slipping a bit. Sunday’s shake was North of Puerto Rico, and  there was  also one 3 days ago in Cuba’s South Eastern tip, by Guantanamo. All three are along the second fault line, and are not aftershocks of  the earthquake from the first fault line, that caused the destruction last month.
This second, more threatening fault line runs along the North shore of The Dominican republic and Haiti, running East to West for thousands of Kilometers. The first fault line that caused the January quakes runs right through downtown Port-au-Prince