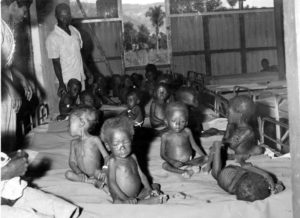 PORT-AU-PRINCE, Haiti — Aid workers in Haiti have begun distributing food to help some of the Caribbean nation’s poorest people cope with a severe drought, an official with a United Nations agency said Thursday.

Aid workers hope to reach 164,000 people with food by the end of the month, when the rainy season is due to begin. The goal is to hand out enough food to last at least a month so that farmers won’t be forced to eat their seeds, which would sabotage their ability to grow crops.

Rains ended earlier than usual in October in the northwest and elsewhere along the northern coast, leading to the loss of sorghum, bean and corn crops.

The scarcity of water and an earlier and longer lean season will put families in a crisis category through June, the network reported. That category means that at least one in five households faces a food shortage, along with high or unusually acute malnutrition. People will need to sell off possessions to get by.

Haiti and its 10 million people are especially vulnerable to the whims of weather. A severe drought in 2012, also in the northwest, and the outer bands of Tropical Storm Isaac and Hurricane Sandy wiped out crops, causing many in Haiti to go hungry.

COMMENT: HAITIAN-TRUTH.ORG
The attached photograph is from an earlier famine in Haiti.
For the past several months, peasant organizations have warned of impending dangers. They have warned that peasants have eaten their seed stocks, in order to fight off hunger. Eating seed stocks is the last desperate step of people faced with famine.
The attached article suggests that the UN is distributing food to avert problems until the seeds are planted and crops grow to the point of harvest.
WHAT DO YOU DO IF THERE ARE NO SEEDS TO PLANT???!!!
This is a disaster in planning!!
The UN, OAS, MINUSTAH, Minister of Agriculture and a zillion other expensive high-priced groups should know that you arrange for new seed stock almost a year in advance. The seed companies then produce seeds to meet the demand. There is no point in overproducing seeds since seeds, sitting on the shelf, lose the fertility.
Old seeds produce less.
The Martelly/Lamothe government may face accelerating problems if this danger is not addressed.
$5,000,000 would have been better spent on seeds and schools instead of the Gonaives carnival. And now we are going to have a carnival in Jeremie!!
The Romans tried this approach in their Colloseum…. but, finally, their Mob rebelled and Rome fell.
This screw-up was predictable, and avoidable.
There may be no solution.
Shooting the Minister of Agriculture will simply add costs of a State Funeral to the budget.