If you watched Friday night’s London Olympics opening ceremony, you might’ve done a double-take as Haiti’s athletes strolled into the stadium. 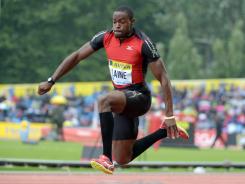 Samyr Laine, Facebook CEO Mark Zuckerberg’s old roommate, is competing for Haiti at the London Games in the triple jump.

What you heard Bob Costas announce during the NBC broadcast was that triple jumper Samyr Laine was Mark Zuckerberg’s freshman-year roommate at Harvard. Yes, that Mark Zuckerberg, founder and CEO of Facebook.

“We had a great time as freshmen,” Laine told the Los Angeles Times. “We really just enjoyed getting to know each other. We enjoyed each other’s company.”

It turns out Laine was Facebook’s 14th member. He still has nothing but nice things to say about Zuckerberg.

“He’s the type of person that, even after being the Time Person of the Year last year, when he’s in D.C., he’ll let me know and we’ll get something to eat or something like that,” Laine said.

Laine is American-born and the son of Haitian immigrants, competing for his parents’ homeland. Not surprising — considering he’s a Harvard alum —Laine earned a law degree from Georgetown. And he might be the world’s best time manager, as he found a way to juggle studying for and passing the New York Bar exam while training for the Olympics.

Proud to be representing Haiti, Laine is now focused on competing and is hopeful to earn a medal in the London Games.

“I want to push my body to do what I know it’s capable of and to do what it hasn’t done yet,” he said.

Here’s hoping Laine gets to add “Olympic medalist” to his timeline.