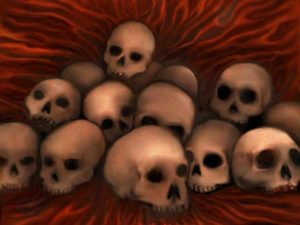 The actual number of deaths from Haiti’s earthquake last year may never be known, but one report suggests the disaster killed far fewer people than the government has said.

A survey commissioned by the U.S. Agency for International Development cites between 46,000 to 85,000 fatalities compared to official estimates of more than 220,000 dead. The unpublished report, which wasn’t released by USAID, was viewed by The Wall Street Journal and other news groups.

On Tuesday, Haiti mission director Carleene Dei said the agency didn’t endorse the report’s findings on the death toll and said the report was aimed merely at helping improve efforts at removing rubble and returning Haitians to their homes. There was no sign the government intentionally inflated the figures.

“Any comment on the death toll of the tragic earthquake of January 2010 that affected so many is beyond the scope of the commission and purely reflects the views of the author,” Ms. Dei said in a statement.

The report, entitled “Building Assessments and Rubble Removal in Quake-Affected Neighborhoods in Haiti,” based its conclusions on a sample of 3,784 buildings in hard-hit sections of the capital Port-au-Prince. It asked residents how many people had lived there before and after the quake among other questions.

Using the same methodology, the report also estimated the number of people made homeless by the January quake at 895,000, versus Haitian government estimates of 1.5 million. It said there were 141,000 to 375,000 people still living in tent cities now—far lower than official estimate of 680,000.

U.N. agencies and non-governmental organizations reacted with skepticism to the report.

“We have to look at the methodology,” said Emmanuelle Schneider of the Office for Humanitarian Assistance Coordination in Haiti, a U.N. agency that oversees Haiti relief efforts.

The official government estimate was based on tent-by-tent interviews, said Leonard Doyle, an official from the International Organization for Migration, a U.N. agency which oversees management of Haiti refugee camps.

USAID commissioned the report through a Washington consulting firm, LTL Strategies. The report’s lead author, Timothy Schwartz, is an anthropologist whose previous work includes a book highly critical of the efforts of major international aid groups in Haiti.

Mr. Schwartz could not be reached for comment on Monday. On his blog, Mr. Schwartz said he expected to get “flak” for the report, but he defended it. “My specialty is quantitative field methods. I’ve been doing surveys in Haiti and the [Dominican Republic] for 21 years. That’s why they hired me to do the job.”

One thing seems clear:The world will likely never know how many people died in Haiti. In the weeks after the quake, the nation was in chaos, with trucks dumping loads of bodies into mass graves and the government in complete disarray.

Dr. Claude Surena, an official from Haiti’s Ministry of Health, said the Haitian government estimates were based on reports from the field by both government and its international partners. “At the time of the earthquake, the government’s capacity was virtually annihilated, most of the ministries and the palace were destroyed, we lost a lot of people and a lot of records,” he said.

Last year, international donors pledged at least $11 billion for reconstructing Haiti, including $4.8 billion to be spent by the end of 2011. But as of May 15, only $2.1 billion had been disbursed, according to the Interim Haiti Reconstruction Commission.

OF COURSE THERE WILL BE CONSEQUENCES!!!

The death toll was probably much higher than originally claimed. Some suggest 500,000 with tens of thousands losing limbs. The homeless situation was/is staggering and the unnamed author of this USAID farce makes it sound like a minor accident.

There will be consequences.

And Haiti continues to suffer from an accelerating, but almost forgotten, cholera epidemic that will infect over 1,000,000 people by the end of this year. Of course, the HAITI DIRECTOR USAID can simply ask another idiot to write another report and the epidemic can be reduced to a couple of dozen people.