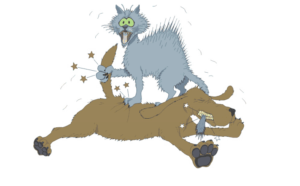 I am sitting here listening to some people scream and yell at each other – on radio Caribe- over the judge’s autopsy as though it holds the Holy Grail, plus seeds of the Martell/Lamothe government failure.

Everyone avoids the simple, specific facts, to the effect that the gut was not in good health, had a bad circulatory system, high blood pressure, a previous heart intervention and an earlier, small stroke.

The judge died of a stroke.

The autopsy (published elsewhere on this site) indicate all of these factors, yet Haitians continue to waste the Nation’s time and resources, by continuing a debate about nothing.

It is an embarrassment.

We have children starving and unable to attend school because of this, and the lack of shoes or simple school materials.

Does anyone other than President Martelly and Prime Minister Lamothe care?

And we are witnesses to Parliament holding a trial and finding Martelly and Lamothe guilty of meeting with the judge, when no meeting occurred. On the basis of their “trial” they want Martelly/Lamothe to step down.

Heaven help us from Democracy.

It has no calories.

And it has no protection from the ongoing, and accelerating stupidity of our Senate and Chamber of Deputies, backed by frenzied members of the media and intellectual community.

LET THE MARTELLY/LAMOTHE TEAM GET ON WITH SOLVING THE NATION’S PROBLEMS. THEY MAY NOT BE PERFECT BUT LOOK AT A FEW THINGS THEY HAVE DONE.  LOOK AT THE MILES OF ROADS COMPLETED – THE SCHOOLS OPENED.

NOW THE MARTELLY/LAMOTHE TEAM REQUIRE NATIONAL SUPPORT IN ORDER TO HOLD ELECTIONS IN 2013 – OR EVER. THIS WILL BE IMPOSSIBLE WITH MORONS LIKE MOISE JEAN-CHARLES, BELIZAIRE AND OTHERS FIGHTING AGAINST ANYTHING AND EVERYTHING.

WHAT HAS MOISE JEAN-CHARLES DONE – OVER THE PAST MONTHS – OTHER THAN SCREAM, YELL, THREATEN AND MOBILIZE EFFORTS TO DESTABILIZE OUR GOVERNMENT AND ECONOMY?

THIS WOULDN’T HAPPEN UNDER FRANCOIS DUVALIER!!!