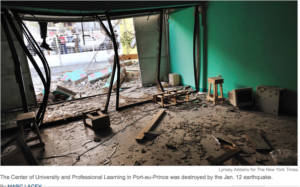 PORT-AU-PRINCE, Haiti — Christina Julme was scribbling notes in the back of a linguistics class at the State University of Haiti when, in an instant, everything went black.

Christina Julme was in her linguistics class when the earthquake struck, and she was buried for two days under the rubble.

Conor Bohan, an American who founded the Haitian Education and Leadership Program, a scholarship program for students, surveying the wreckage of the program’s center.

“You’re in class, your professor is talking, you’re writing notes and then you’re buried alive,” said Ms. Julme, 23, recounting how her semester came to a halt on the afternoon of Jan. 12 when the earthquake turned her seven-story university into a towering pile of wreckage, with her deep inside.

Ms. Julme, ailing and slipping in and out of consciousness, was pried from her collapsed classroom after two days of having her dead professor’s leg touching her, an injured friend’s face a few inches from her own and many of her classmates’ bodies growing fetid.

Haiti’s best universities are in wreckage, their campuses now jumbles of collapsed concrete, mangled desks and chairs, and buried coursework. Hundreds of professors and students were entombed, although the exact number of dead is complicated by the fact that class lists and computer registries were also wiped out by the quake.

At St. Gerald Technical School, workers going through the wreckage with heavy machinery came across a classroom in which dead students were still at their desks. At Quisqueya University, much of the multimillion- dollar renovation work that had just been completed was shaken to bits. Joseph Chrislyn Bastien, 25, an engineering student, peered into a foot-high crevice of concrete where one could see shoes, books and flattened furniture. “This was a classroom,” he said.

The obliteration of higher education is expected to have longstanding effects on this devastated country, where even in the best of times a tiny percentage of young people went on to college.

“What the earthquake has done to us, besides breaking buildings and killing much of the population, it has wiped out many of those who were the future leaders of the country,” said Louis Herns Marcelin, a University of Miami sociologist who runs a research institute here. “The impact was huge, but we still don’t even know how huge.”

The country’s main nursing school is gone, as is the state medical college. The science building at the state university has been ripped open, and the teacher’s college teeters on its side. At the Graduate School of Technology, Jean Foubert Dorancy, 22, climbed atop the wreckage, littered with computer parts, and lamented: “This was the best computer school in Haiti. What do I do now?”

It was a troubled education system that fell. Many of its buildings were decaying, the result of decades of neglect. Classes were overflowing with students, and many had only mediocre preparation academically because students from the best high schools, the children of the elite, would often go to overseas universities and not come back.

In a country so poor, the sudden loss of educational opportunity is hard to fathom. “Most of my friends weren’t studying but were just hanging on the street,” said Jacques Gaspard, 38, who was enrolled in a trade school that collapsed. “Now I’m on the street, too. Everybody’s on the street.”

Protests, strikes and walkouts were a regular feature of Haitian university life, and hundreds of state university students had, in fact, left their classes to march around the National Palace to protest the killing of a popular sociology professor when the earthquake struck.

“That protest saved a lot of lives,” said Beneche Martial, 26, a medical student who helped arrange it. “We were blocking the streets, yelling and marching. When the earth started to shake we were running in all directions.”

Haiti’s state university was the only place to earn a degree until the end of the long rule of the Duvaliers in 1986. Since then, scores of universities have opened, many of them slipshod institutions without accreditation, but others are well-run schools open to talented students regardless of their means.

In the days after the earthquake, the director general of the United Nations Educational, Scientific and Cultural Organization, Irina Bokova, called on universities outside Haiti to help shoulder the burden. “Universities in the region and beyond should make every effort to take in Haitian students,” she said in a statement, calling the damage to Haiti’s education system “a catastrophic setback for a country already hit by other disasters.”

Among the universities that have offered to help displaced students and faculty members is Dillard University in New Orleans, which suffered significant damage during Hurricane Katrina. A delegation of university deans from the Dominican Republic also recently visited President René Préval of Haiti to offer to help displaced Haitian college students. One proposal would allow Haitians to cross the border to attend some Dominican universities on weekends.

There are already plans to revive Haiti’s universities using tents or temporary structures until more permanent structures can be built. And some early signs have emerged that Haiti’s damaged university system may be rebuilt better. At Quisqueya, Evenson Calixte, the assistant dean of engineering, said all students would be required to study geology from now on so that they understood earthquakes. There will be a particular focus in the curriculum on building codes, he said.

It was arguably a shortage of educated professionals in Haiti that ensured so much of Haiti would collapse. “There’s a total lack of qualified architects, urban planners, builders and zoning experts,” said Conor Bohan, an American who founded the Haitian Education and Leadership Program, a scholarship program for students with top grades but few resources. “People were living in substandard housing in places where they shouldn’t have been.”

With classes canceled for the foreseeable future, many students are using their free time to help with the recovery effort. Future doctors are pitching in at field hospitals and helping arrange a major vaccination campaign. Psychology students are talking with displaced people about how they are holding up. Ms. Julme, who studied communications, managed to get a job at the United Nations radio station, although she focuses on music, not news, to get her mind, and the minds of her listeners, off of all the awful things that have occurred.

“The dean is dead,” she said of her destroyed linguistics college. “The vice dean is dead. I don’t see how the university can go on.”

Haiti’s educators hope that international rebuilding efforts ensure that universities are able to bounce back. “How are you going to have a critical mass of people to run the country if you don’t invest in the next generation?” asked Mr. Marcelin, the sociologist, who is also the founder of the Interuniversity Institute for Research and Development, a consortium of universities that operate in Haiti. “If the international community overlooks this, we will spend our lives dependant on experts from the outside.”