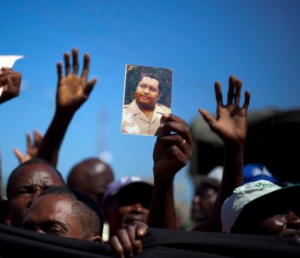 The lead defense attorney for Haiti’s former dictator Jean-Claude Duvalier has said judges will be responsible for a “civil war” if an appeals court rules against his client.

Privately owned Radio Kiskeya on Wednesday broadcast the remarks by lawyer Reynold Georges, who spoke at Haiti’s Supreme Court after filing an appeal Tuesday against a lower court decision that Duvalier can face charges involving human rights abuses. Georges also said he requested the removal of three judges because they were untrustworthy.

“If a decision is taken against Jean-Claude Duvalier by the court of appeals,” Georges said, “that could cause civil war. The judges will be held responsible and held accountable for the civil war.”

The judges ruled last month that the Duvalier case warranted further investigation into the human rights abuses that were allegedly committed during the dictator’s 15-year reign, which ended with a popular uprising in 1986. The court decision was celebrated by the prosecution because it creates an opportunity for prosecutors to submit more evidence and perhaps even put him on trial.

The court found that Duvalier could be charged with rights abuses because Haiti is bound by international law that says there’s no statute of limitations for crimes against humanity.

Georges said he filed the appeal because Haiti doesn’t have a law that recognizes crimes against humanity.

“Baby Doc” Duvalier abruptly returned to Haiti in 2011 following 25 years in exile in France. Human rights and embezzlement charges were filed against him but he was never jailed.

Duvalier defended his tenure last year when he gave an unexpected testimony. He described Haiti as a better place under his rule.

It is truly bizarre to watch this game.

On the other hand, the Aristide/Preval era was a period of cocaine traffic, murder, massive thefts of public funds and a decline of educational standards, even as Aristide/Preval claimed to be opening new schools – which they weren’t. They were in control of the drug traffic and made hundreds of millions from this activity.

Numerous murders were carried out under their direct orders – such as Amaral Duclona’s assasination of a french consul and the director of CNE, so Jude Celestin could take over.

The Statute of Limitations has run out on Duvalier.

This is not the case with Aristide and Preval.

Yet, the human rights crazies ignore the facts and pursue a false flag.

The real focus should be on Aristide Preval.

Let’s have some Justice for Mireille Durocher-Bertin, Jacques Dominique, Max Mayard, Pastor Florvil, and hundreds of others.

1 thought on “DUVALIER APPEALS – BUT WHAT ABOUT ARISTIDE AND PREVAL??-Added COMMENTARY By Haitian-Truth”