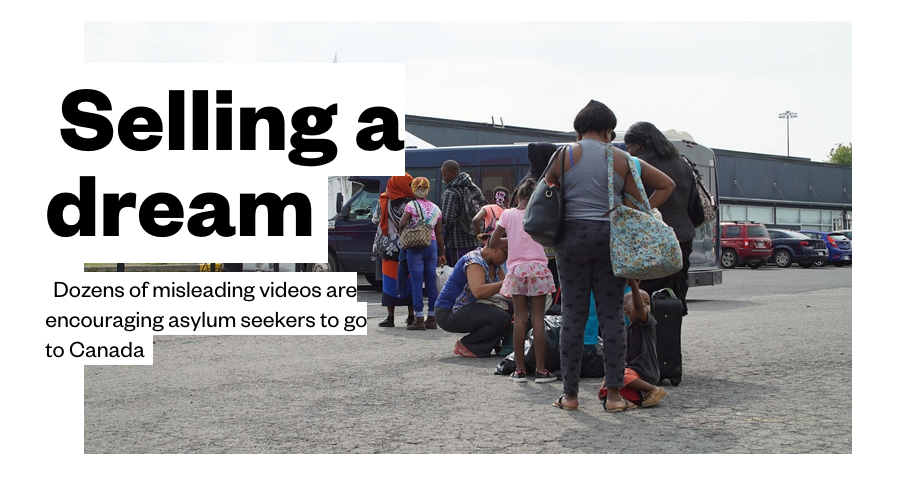 Immigration workers in Quebec are worried that videos spreading misinformation about what it takes to be granted refuge in Canada are partly to blame for the stream of asylum seekers heading north. And they’re afraid some could be part of profit-making scams.

More than 3,000 people have been intercepted by the Royal Canadian Mounted Police at the U.S. border with Quebec in the first two weeks of August alone. Quebec’s Lacolle border has been especially overwhelmed, processing an average of 230 people —mostly Haïtians— every day.

This steady stream of arrivals has coincided with the publication of a slew of often misleading videos that have garnered tens of thousands of views, according to immigration workers.

“We know for a fact, based on statistics that probably 50 percent will be sent back to Haiti.”

“We’d been looking at why and how people coming in were still flooding the border, and we heard a lot of people say we went on internet, we saw such and such video, people were telling us to come to Canada,” said Frantz André, from the Action Committee for People Without Status.  His team has identified dozens of such videos from different sources.

These videos, Frantz says, provide erroneous information about Canada’s immigration policies, oversimplifying the arduous application process and exaggerating the chances of being accepted into the country. According to Frantz, some even recommend people bring young children with them to cross the border, in order to play on the sympathy of Canadian officials.

“I’m speechless. I think that’s cruel to bring hope to people who will be going through a very long and stressful process,” he explains. “We know for a fact, based on statistics that probably 50 percent will be sent back to Haiti.”

One asylum seeker told VICE News that a video by a YouTuber known as TiFi Pasté-a was an important source of information for him. Active for just over one month, Pasté-a has been posting videos in English and Haïtian Créole telling immigrants living in the U.S. —Haïtian or otherwise— how to seek refuge in Canada. What’s more, she offers to provide viewers with all the necessary insight to enter and stay in the country, at a cost.

In an interview with VICE News, Pasté-a said she was merely “telling people how good is Canada” in her videos, and encouraged anyone who noticed any mistakes to alert her to them.

In a one hour-long video titled “Did you know you can go to Canada as a refugees? [sic]”, Pasté-a talks with seeming expertise about Canadian laws.

She explains how immigrants living in the U.S. can use an exception within the Safe Third Country agreement —which technically prevents immigrants who’ve come to the United States to then go claim asylum in Canada— to go live north of the border.

“Anyone from any country, as in you in the U.S. right now, either legally or illegally, you can move to Canada as a refugee to ask for political asylum, but you must have a family member in Canada,” she explains, adding that she can help people find the necessary immediate family members.

If you prove you are a model citizen, she promises, Canada will welcome you with open arms.

To get your “green card” and stay in Canada, she coaches, you then simply have to work, pay taxes, go to church, and volunteer, “like with the battered woman, the orphans, you give your time for free.” If you prove you are a model citizen, she promises, Canada will welcome you with open arms.

There are also second chances, she claims: “The good thing about Canada is that if you apply for asylum and they don’t give it to you, you will be able to apply for something called humanitarian.”

“We are not giving you the information for free, I have to tell you upfront.”

But that’s not all of it: Pasté-a tells her viewers they also need specific instructions, the right paperwork and a good lawyer in Canada, details she says she can help them sort out, but at a fee.

“Oh and by the way we are not a non-profit organization, my company is Kompa en action, Inc.,” she outlines, giving out her Florida-based office address and personal information. “We are not giving you the information for free, I have to tell you upfront.”

André says he fears some of the videos circulating could be part of a fraudulent practice that extends all the way to Canada. “To be honest, I think there might be some people here in Canada asking people to come. There was an immigration consultant here last week holding an information session [for asylum seekers], asking $30 per person,” he explains, adding that Immigration and Citizenship Canada offers these services free of charge.

“It’s disgusting,” says André. “These are people coming in with very little money.”

When contacted by VICE News, Pasté-a said she wasn’t sending anyone to Canada but extolling the benefits of Canada, and how “Canada don’t deport people if you don’t commit any crimes, that is the truth.”

Pasté-a told VICE News that if people found errors in her videos they were welcome to participate in her next video to point out her mistakes.

Handfield stresses the Canadian government should set up information missions in the United States, “to target affected communities and provide them with the real information.”

The U.S. Better Business Bureau and the Florida Department of Business and Professional Registration both told VICE they had no record of Kompa en action.

The people spreading these rumors are really disgusting!

Many Haitians will have their lives destroyed. By departing the States, they lose whatever they have built since departing Haiti. Now they must start all over again, in Canada, only if Canada allows them to stay. And staying in Canada is not guaranteed.

Haitians, in the States, should challenge their deportation.

At the moment the court is so overloaded that existing cases have an 11 year wait.  With another 50,000 it could be 20 years and a President three times removed from Trump.

Sad, sad, sad but not unexpected.