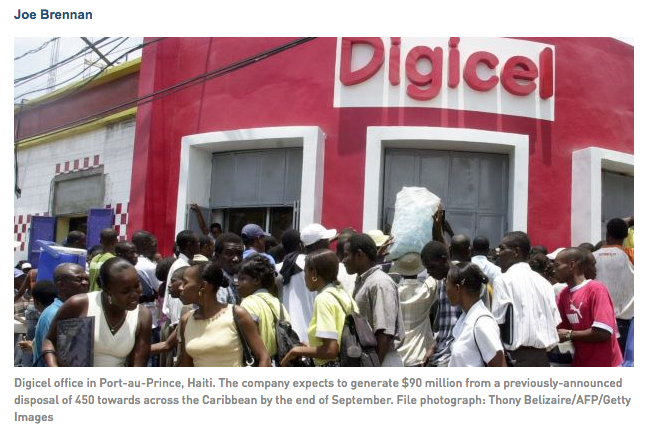 Digicel’s chief executive, Alexander Matuschka Greiffenclau, has signalled the company is considering taking advantage of the low market value of some of its $2 billion (€1.7 billion) of bonds that mature in 2020 by buying them on the cheap.

Speaking on a call with analysts on Thursday, group executives also said that the Denis O’Brien-owned company is set to sell more wireless communications towers – this time in the South Pacific region – as it seeks to lower its total $6.7 billion debt pile, according to sources.

Mr Matuschka Greiffenclausaid that the company was looking at a number of options regarding its 2020 bonds, including a so-called liability management exercise, which investors have taken to mean that the company is looking at ways to fund a repurchase of the notes at a discount to par value. The bonds jumped 5 per cent to 70c on the dollar as the market digested the comments.

The chief executive said that a decision on the matter may be taken in the near term. However, he did not indicate how Digicelwould finance such a transaction.

Fitch, one of the world’s leading ratings agencies, downgraded its stance on Digicel’s creditworthiness over the weekend amid concerns about risks to the group’s ability to refinance debt that falls due in the next five years, unless its improves its debt ratios and delivers “sustainable” free cash flows.

Digicel, which reported to its creditors on Wednesday that its earnings dropped 2 per cent in the quarter to the end of June, gave an update on its planned asset sales on the investor call.

The company expects to generate $90 million from a previously-announced disposal of 450 towards across the Caribbean by the end of September. Digicel executives also said that the company is on track to raise a further $55 million from the sale of a South Pacific towers portfolio by the end of December. The group plans to raise up to $500 million from asset sales by next April.

Meanwhile, the executives also said they are optimistic about mobile phone data revenues, which dipped in the last quarter, increasing significantly over time as more of its 13.9 million customers move on to fourth-generation (4G) services.