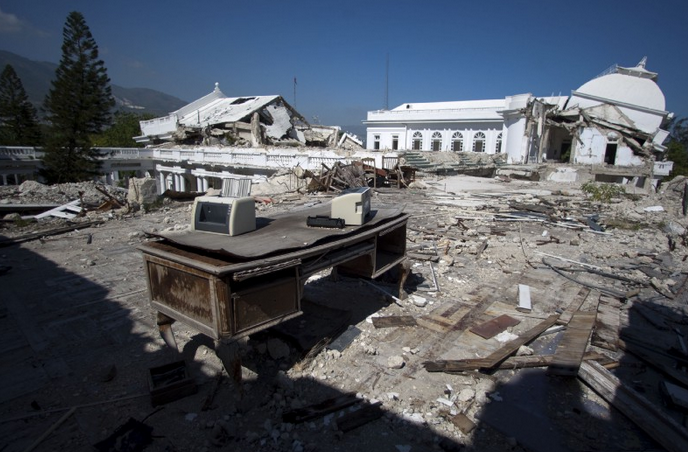 In this Aug. 17, 2012 photo, printers sit on a desk on the roof the earthquake damaged National Palace in Port-au-Prince, Haiti. CREDIT: AP Photo/Dieu Nalio Chery

The U.S. government apparently sees Haiti through two lenses. On the one hand, it’s a country where conditions are good enough for the U.S. Department of Homeland Security (DHS) to repatriate Haitian immigrants in six months, but on the other, conditions are also so dire that the U.S. Department of State has to issue a travel warning for American citizens to “consider the risks” before they visit.

On Monday, DHS Secretary John Kelly announced his agency would extend a deadline for temporary protection by six months until January 22, 2018 for the more than 58,000 Haitians living in the United States. After an earthquake leveled highly-populated areas of Haiti in 2010, the United States offered Temporary Protected Status (TPS) for Haitians, a type of immigration benefit for people unable to return to their home countries because of war, natural disasters, or other extraordinary conditions.

DHS senior officials made clear on a press call that while the Trump administration has the discretion to extend TPS, it expects current Haitian TPS holders “to resolve their affairs, to obtain travel documentation” so that they could prepare to permanently move back to Haiti in six months.

But on the exact same day, the State Department issued an alarming travel warning cautioning U.S. citizens to consider the risks of traveling, “due to its current security environment and lack of adequate medical facilities and response, especially in the areas of Petionville and the storm-damaged southern peninsula departments of Grand Anse and Sud.”

The conflicting views between the two U.S. agencies were not lost on Jonathan Katz, the only full-time, on-the-ground American journalist in Haiti during the 2010 earthquake and author of The Big Truck That Went By: How the World Came to Save Haiti and Left Behind a Disaster.

“It is neither necessarily as bad as the travel warning suggests nor is it anywhere near as good as Kelly suggests when he’s defending the new policy,” Katz said in a phone interview on Wednesday. “What’s interesting to me is you can see in real-time how two different parts of the executive branch are cherry picking from two different sets of facts to come up with two completely different conclusions.”

“On the one hand, DHS thinks Haiti is in good condition for 58,000 people to move there today and restart their lives under incredibly difficult circumstances, whereas the State Department doesn’t even think its own personnel should go to restaurants at night in the neighborhoods they live in because it’s so horribly dangerous,” Katz added.

Rebuilding efforts from the 2010 earthquake and other disasters have been hampered by a variety of factors including cholera introduced by United Nations peacekeepers and continuous political turmoil. Yet DHS senior officials justified Kelly’s decision to extend TPS for only six months — and not the recommended 18 months from the Haitian ambassador to the U.S. — by pointing to the rebuilding of the presidential palace; withdrawal of UN peacekeeping troops country as a sign of a “stable government that’s capable of governing its citizenry;” and the fact that 96 percent of internally displaced people have left camps set up in response to the earthquake.

“It’s a fantasy to think conditions in Haiti, as a whole, are better than they were seven years ago,” Katz said. “It’s not a question of the leftover damage from this one-time disaster that happened seven years ago. The problem is that the earthquake, and Hurricane Matthew, and all these other disasters we talk about in Haiti were as profoundly deadly and devastating as they were because the country is so vulnerable.”

Katz, who worked extensively in Haiti before coming back to the United States last year, pushed back against Kelly’s cheery outlook. Katz warned against sending people back to Haiti at a time when the population of 10 million are living on a “day-to-day basis” where the country “has that little” and “has that much degraded infrastructure.”

“It would be very, very, very difficult for anybody using actual facts to make an argument that life in Haiti has gotten better in this universal way — where all of a sudden the people living in Haiti at the moment are living better, more productive, safer, more stable lives than they were before,” Katz said. “But that you could also dump another 60,000 people in the country and they would automatically find jobs and have good living situations.”

Kelly’s comments about improving conditions hinge on a “superficial” outlook that “kind of make sense if you’ve only been paying attention to Haiti by watching occasional specials on CNN over the past seven years,” Katz said, poking holes in the official rationale.

“They make sense to Americans who have a very, very, very passing familiarity with what’s going on in Haiti over the last ten years,” Katz said. “But if you actually try to construct a picture of what is food security like in Haiti, what is infrastructure like in Haiti, what is governance like in Haiti in 2017, there’s no set of facts that you can string together that would suggest that the country is any more ready to support itself or handle the influx of tens of thousands more people than at any point in the recent past.”