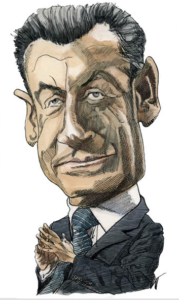 In return for this offer …. concrete help for the Haitian people, Preval  planned a massive demonstration, in front of the National Palace, as Sarkozy toured  the site with Preval.

He hoped to embarrass the French president and anger him at what was supposed to appear as a demonstration by Aristide.

Thousands and thousands of people appeared with signs demanding the return of Jean-Bertrand Aristide. It was one of the largest manifestations since Aristide’s departure in 2004 in what he claimed was a Geopolitical Kidnap by George Bush.

There was just one catch.

The demonstrators – the main core – were paid by Preval. The going rate was $2.00 U.S. per person and he budgeted $20,000 in his move to embarrass Sarkozy.

Many people, with nothing better to do, joined the mob…drawn from their shanty towns around the palace.

Sarkozy has the entire dossier; A file that outlines Duclona’s criminal, murderous activities on behalf of Rene Garcia Preval. While Sarkozy might not be interested in the many murders and kidnaps, carried out by Duclona, he is interested in Duclona’s confession to the murders of a French Consul and another French national.

Sarkozy’s dossier also details the steps taken by Preval to obtain a false passport and hide Duclona in the Dominican Republic. Sarkozy knows that Jude Celestin – boyfriends of Preval’s daughter – arranged for the passport. He knows that Duclona stayed at the home of Preval’s sister on the night before his departure to the Dominican Republic. He has copies of the Western Union receipts that detail the transfer of funds from the Palace, the Prime Minister’s office and Preval himself, to the hiding killer, kidnapper Duclona. In fact, he has the entire MINUSTAH, Dominican file on Preval’s hit man, gang leader, fellow conspirator.

If Preval and Sarkozy were playing poker, Sarkozy held 4 Aces and a King to Preval’s pair of Twos.

The Sarkozy visit was a disaster for President Preval, another nail in his political coffin. It might be another nail in his personal coffin as Sarkozy presses for a “no impunity” for Preval and his close associate’s theft of Haitian funds….the most recent of which was the theft of Venezuela’s $90,000,000.

In spite of this, Preval still intrigues in his effort to extend his control by maneuvering into another situation in which he will rule by decree during the first months of 2011. During this period Preval plans to amend the Constitution.

In a nation with any sort of structure, Preval and his intimates, Jacques Alexis, Jude Celestin, Bellerive, Elisabeth Delatour-Preval, Senator Lambert, Ed Zenny and the President himself, would be in jail.