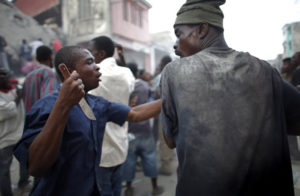 A growing use of weapons and cocaine trading through quake-stricken Haiti threaten stability ahead of key November elections, the United Nations said Thursday.

A new report on the impoverished Caribbean state, where a magnitude 7.0 earthquake on Jan. 12 killed 250,000 people, said criminal gangs are increasing their grip on many of the 1,300 camps where most of the estimated 1.3 million homeless are still based.

Presidential and legislative elections are to be held on Nov. 28 and the report said “the electoral period may bring to the fore new threats to stability.”

The UN Stabilization Mission in Haiti (MINUSTAH) “has noted an increasing number of weapons in circulation, especially in traditionally high crime areas of the capital.

“In addition, there is a risk that campaigning for the forthcoming elections — particularly the legislative — may be tainted by financing from illegal activities, including the drug trade, which continues to be a destabilizing factor in Haiti.”

The MINUSTAH report said incidents of kidnapping for ransom have increased since the quake and illegal airstrips and isolated beaches on the northern coast are again being used for narcotics trafficking.

Haiti is a major transit point for cocaine and other drugs sent to the United States.

“Drug trans-shipment through Haiti is an underlying problem, that if unchecked, will undermine all efforts by the government and the international community to build state institutions and political stability,” the UN said.

The report said the cocaine trade has “reportedly increased” since the quake because of the weakened government and in spite of heightened air and land patrols by UN forces.

This was an original cornerstone of his presidency, in 2006, when he hosted all gang-leaders at a formal palace  dinner. Since then, key gang leaders answer directly to President Preval and are immune to police or MINUSTAH actions.

Now these gangs have moved to control the tent cities where no police are to be found.

The cocaine traffic has, according to MINUSTAH people,  increased 300 percent since the earthquake.

Preval and his team are involved with all of this, each item useful in their effort to derail or control the electoral process.