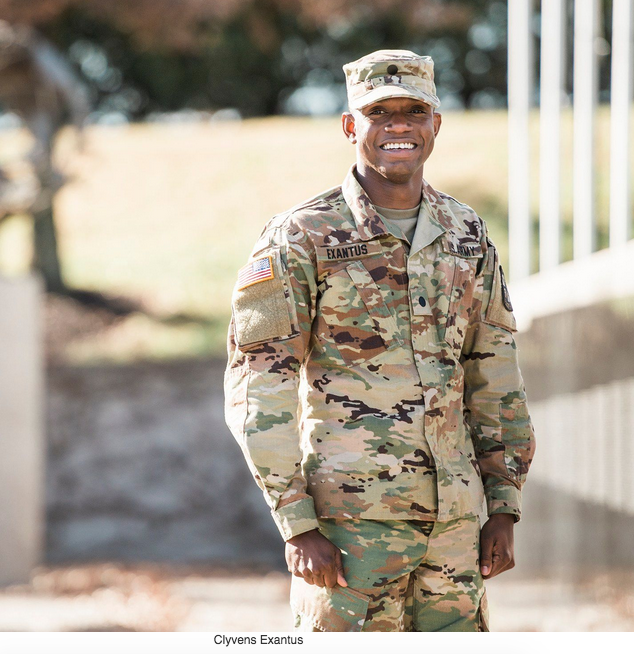 Clyvens Exantus is on the cusp of accomplishing two of his life goals in one day. The 25-year-old Pittsburg State student and Army ROTC cadet is set to commission as a Second Lieutenant and earn his bachelor’s degree in political science on Friday.

“If you’d have told me this 10 years ago, I don’t think I’d have believed you,” said Exantus. “I’ve have wondered what you were up to, because it probably would have been no good.”

Ten years ago, Exantus was living 2,000 miles away in his home country of Haiti. Exantus’ parents moved to the U.S. when he was a child in order to seek a better life for him and his siblings, who stayed behind in Haiti.

“I grew up with my grandmother first,” said Exantus. “She passed away when I was about 10. I then was sent to live with my Auntie whose name was Sheila. She put an emphasis on going to school.”

Because they had moved to the U.S., his parents were able to pay for private school.

“That’s a luxury not every kid in Haiti has,” said Exantus. “Now, I just want to emphasize what private school in Haiti is.” He pauses for a chuckle before adding, “It’s not the private school of here, but still, I was able to get an education.”

Thanks to his aunt’s insistence on the importance of academics, and his parents’ financial support, Exantus began to see the possibilities an education could provide.

“Most of my peers weren’t going to high school,” said Exantus. “My auntie and grandma really wanted me to be different. I guess I inherited their competitive nature. I wanted to do better than the rest of my peers. I had dreams of becoming a lawyer.”

After spending his entire childhood away from his parents, Exantus found himself, at the age of 17, moving from Haiti live with them in Maryland.

“It was a culture shock,” said Exantus. “There was no uniform to wear, buses came to pick you up and you didn’t have to pay the woman who drove you to school.”

Not only did Exantus have to learn a new culture, he also had to reconsider his relationship with his parents — especially his father, who had transformed his own life from math teacher in Haiti to non-commissioned officer in the Army.

“I’d never lived with my dad,” said Exantus. “So, I had this picture in my head of a math teacher. But then I came to live with him and here was this incredibly competitive man. He woke up early for P.T. (physical training), and took pride in what he did. His Army friends would come over and I remember thinking, ‘I want that type of brotherhood.’ So, I knew I wanted to join the Army.”

His parents would move several times over the subsequent years, eventually settling in Fort Riley, Kansas, where his father currently is stationed. It was at PSU that Exantus was able to combine his two passions, military and academics, into one by contracting in the ROTC program.

“I actually Googled colleges in Kansas, and Pittsburg State showed up,” said Exantus. “I saw the Gorilla mascot and thought, ‘Well, this is unique.’ When I toured campus, I was shown the ROTC Hall of Fame and that’s what sold me. I saw the type of people that graduated from here. I went home and told my dad I knew where I was going.”

Exantus has made the most of his time while at PSU, and, according to Major Eric Hollingsworth of PSU’s Military Science department, he has a bright future.

“He’s a hard worker, and he’s hungry,” said Hollingsworth. “A lot of the cadets haven’t had the trying life experience Clyvens has had. He’s definitely an outstanding example of the type of officer this program is known for producing.”

For his part, Exantus understands the tremendous opportunities he’s had from Pittsburg State and the Army.

“I can’t say thank you enough,” he said. “Think about it: A kid from the poorest country in the western hemisphere. For me to get an opportunity to come to Pittsburg State and not only graduate college, but to also commission in the United States Army, the greatest fighting force the world has ever seen. It’s beyond my wildest dreams.”

Pittsburg State University’s ROTC Commissioning will take place at 10 a.m., on Friday, Dec. 15, in the Dean Family VIP Room at the Bicknell Family Center for the Arts.