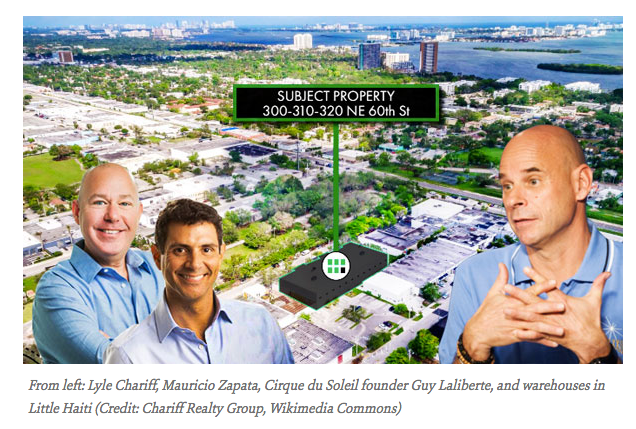 The Canadian theater impresario paid $6.9 million cash for a trio of new warehouses at 300, 310 and 320 Northeast 60th Street in Little Haiti, The Real Deal has learned.

Laliberte, who founded Cirque du Soleil in 1984 and still owns a stake in the entertainment company, is partnering with Magic City developers Tony Cho, Bob Zangrillo and Plaza Equity Partners on the planned $1 billion mixed-use project.

The buildings are surrounded by land owned by Zangrillo, property records show.

A spokesperson for Laliberte said the warehouses will be used as offices for its employees, as well as storage space in preparation for the opening of Magic City.

Chariff and Zapata said the sale sets a record for warehouse deals in Miami at nearly $400 per square foot, though TRD could not independently verify the record. They had multiple buyers, but the Nevada company wanted all three buildings.

Earlier this month, Magic City announced it brought on Laliberte as a partner in the 17-acre mixed-use tech- and arts-oriented development. His company, Montreal-based Lune Rouge, develops and invests in projects tied to technology, arts, entertainment and real estate.

The first step of the partnership will be to apply for a temporary use permit for the former Magic City Trailer Park. As creative director, Laliberte will create a pop-up experience on the former trailer park land, with local retail and food and beverage tenants.