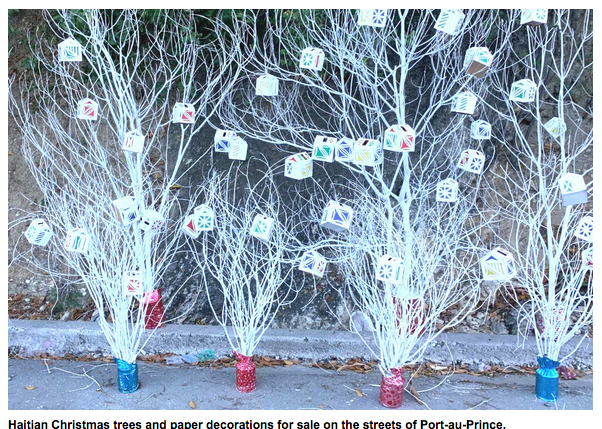 An uneasy calm has descended over most of Haiti for the past few weeks. The underlying issues that led to months of protests and a national lockdown, known here as peyi lòk, remain unresolved. But all sides have suspended operations for the moment. This is not the result of any formal negotiation between the fractured government and opposition camps. Instead, it seems as if everyone involved in the conflict just needed a break for the holiday season and decided at the same time to back down. The result has the eerie quality of a Christmas truce, with the streets suddenly bustling with festive preparations. People are once again complaining about traffic jams in the capital, secretly pleased to be doing so after being locked in their homes since September. The mood is tempered, however, by the unquestioned knowing that massive anti-government protests are almost certain to resume early in the new year.

I was struck over the past week, while driving around Port-au-Prince, that two Haitian Christmas traditions have an added symbolism this year. White painted tree branches are for sale along streets in the wealthier parts of the city, and these will be decorated with ornaments much as fir trees are adorned in less tropical climates. Also for sale are small white paper churches with colored tissue paper window inserts, larger versions of which are intended to have a candle placed inside. Given what the country is going through, the white of both the branches and the church ornaments evoked for me a flag raised above the field of conflict.
I use the word conflict here because, make no mistake, what has been raging here is a battle for the very soul of Haiti. The principle issue is government corruption and how this has led to inflation, fuel shortages (fuel is currently available, but more shortages are projected for next year), and the high cost and shortage of food.
The irony is that there is near unanimous consensus among government officials, including President Jovenel Moise, regarding the presence and impact of corruption among government ranks and the individuals and companies doing business with the government. Two years of widely reported evidence related to what is known as the PetroCaribe scandal has left no choice in the matter. When an estimated $2 billion (some reports say as much as $4.2 billion) of government funds earmarked for improvements in agriculture, health, and education gets misused, misappropriated as well as outright stolen, it is hard to ignore. But while all agree that corruption exists, there is considerable divergence of opinion when it comes to exactly who, in three successive administrations, is to blame or how to correct the situation.
Haitians have voiced anger at this situation over the past year and a half. That anger was initially spurred by increasingly detailed official reports on the misuse of these funds. Anger built further as the direct consequences of this corruption began to accumulate in a sort of perfect storm of fuel and food shortages mixed with out-of-control inflation.
Then a few months ago, what had been sporadic street protests transformed into a full-scale national lockdown with armed gangs and extensive road blockades bringing businesses, schools and government functions to a standstill. What began as a grassroots protest to get rid of corruption has now been largely co-opted by the very purveyors of that corruption.
The legitimate voices of protest in Haiti and among the extensive diaspora in the US, Canada and Europe are caught in a quandary. The unresolved issues warrant continued action, but the action that has emerged is violent and largely implemented by gangs who are being paid by those who will benefit from keeping corruption in place.
The national lockdown of the past months is, by all accounts, likely to resume in mid-January. It will continue to put pressure on both the government and the opposition to come to some agreement. But what can be expected by way of an outcome when the protests against corruption are being usurped by the agents of that corruption?
If there is a silver lining it is that what was once widely known, but not acknowledged in any meaningful way, is now under a very public microscope. The corruption genie is spectacularly out of the bottle, and this is the first step to finding a lasting Haitian-led solution.

I would like to conclude by introducing a new term “rational optimist” to the development lexicon. This I apply to those from the business, non-profit, institutional and government sectors who have weathered peyi lòk, who know there is still more political and economic upheaval to come, but who nevertheless remain resolutely committed to staying the course to be part of building a prosperous and equitable future for Haiti.