Published: November 14, 2010MEXICO CITY — The death toll in Haiti’s cholera epidemic has reached more than 900, the government reported Sunday, as aid groups rushed soap and clean water to a disaster-wracked population to fight the disease.

The Ministry of Health reported that as of Friday, there had been 917 deaths and more than 14,600 were hospitalized with cholera-like symptoms. That is up from the 724 deaths and 11,125 hospitalizations reported a few days before. 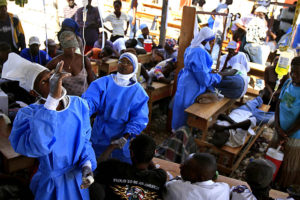 The disease has been found in 6 of Haiti’s 10 provinces, known as departments, and is most severe where it originated, in Artibonite, which accounts for nearly two-thirds of the deaths.

Several epidemiologists have said the disease has not peaked and will likely worsen and break out in other regions of the country, with United Nations health officials estimating about 270,000 may be sickened in the coming years. Several new cholera treatment centers are springing up in the capital and other areas.

“The trend is increasing and it is propagating from department to department,” Roc Magloire, the Ministry of Health’s epidemiologist, said in a telephone interview on Sunday. He referred questions to the ministry’s director general, Gabriel Timothee, who could not be reached.

Hospitals in Port-au-Prince, where more than one million earthquake refugees live in congested, squalid tent encampments, are overflowing with patients exhibiting cholera symptoms, and the death toll there has reached 27. The disease was first reported in the capital on Nov. 8.

President René Préval, at a conference on the disease on Sunday in Port-au-Prince, urged people to wash their hands frequently and drink only potable water, The Associated Press reported. But even before the earthquake, most of the population lacked access to clean water and sanitation.

Cholera, a bacteria that thrives in feces-contaminated water, causes severe diarrhea and vomiting that can dehydrate and kill its victims in hours without treatment. The rate of severe cases, about 30 to 40 percent, is far higher in Haiti than the 25 percent in a typical outbreak because of extreme poverty, unsanitary conditions and the fact that cholera has not been there for 40 years.

“When we go around and give advice about hygiene, they say, ‘Let me have soap, I can’t afford it,’ ” said Leonard Doyle, a spokesman for the International Organization for Migration, an agency that is distributing water purification tablets and cleaning supplies.

On Friday, the United Nations requested $164 million from humanitarian agencies and donors to put in place a strategy to help the government respond to the disease. The largest piece of the plan is $89 million for clean water, sanitation and hygiene.

Officials in the neighboring country, the Dominican Republic, say they are limiting markets on the border and taking other steps to ensure cholera does not reach that country, where thousands of Haitians live and work.

A suspected case turned out not to be cholera, the country’s health minister said Sunday, according to a Dominican newspaper, Listin Diario, which said the Dominican Republic is prepared to treat 7,500 to 10,000 cholera patients.