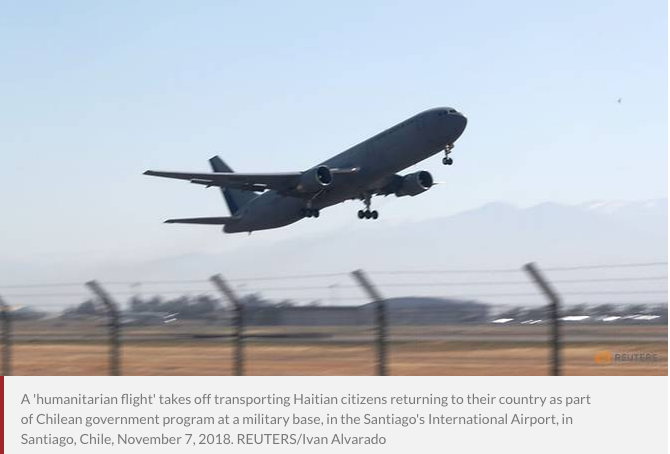 REUTERS: Chile returned a planeload of Haitian immigrants to their native country on Wednesday (Nov 7) in the first in a series of “humanitarian flights” criticised by migrant groups as “forced deportations.”

At a Santiago sports centre, 176 people gathered to board coaches for the airport and a Chilean air force flight destined for the Haitian capital Port-au-Prince.

A total of 1,087 people have signed up for the flights back to Haiti, the Chilean interior ministry said in a statement.

Around 150,000 Haitians have immigrated to Chile in the past two years, it said.

The initiative is one of several measures by the centre-right government of President Sebastian Pinera to cut migrant numbers.

It requires those leaving to sign a declaration that they will not return for nine years, and asks they take any immediate family with them.

The government said the policy was aimed at those who had struggled to find work in one of Latin America’s richest economies, in some cases having been lured by people traffickers with false promises.

But the policy has generated controversy among some migrant groups, rights campaigners and academics. Haiti is still one of the world’s poorest countries, blighted by natural disasters, political upheaval and poor security.

The National Platform of Haitian Organisations in Chile, which represents 30 separate refugee groups, said on Wednesday that the flights represented “an enforced deportation of people” and accused Chile’s government of adopting “racist” policies.

Jose Tomas Vicuna, director of Chile’s Jesuit Centre for Migrants, said the need for such flights should pain all Chileans. “176 people leave with significant emotional baggage from what they have experienced in Chile,” he wrote on Twitter.

Subsecretary Rodrigo Ubilla told reporters at the airport on Wednesday that migrants from Colombia were requesting a similar service.

“These people formally made this request because they have not been able to achieve their dream of finding a new life in our country,” he said.

At the sports centre, returnees told Reuters they had encountered joblessness, hunger and racism in Chile.

Jean Baptiste Brignol, 38, said he had a visa, but could not find work. “The bosses of the companies here don’t want Haitians working for them. They don’t like the skin colour,” he said. “President Pinera took pity on us and we are grateful.”