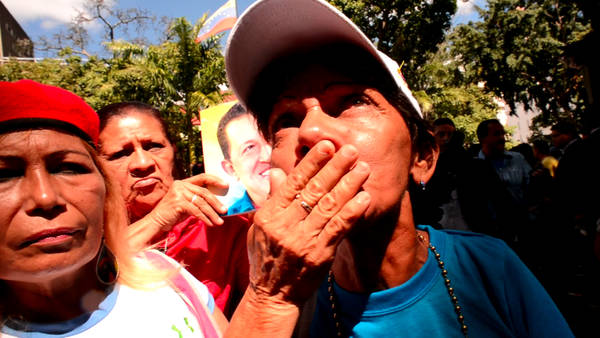 The People’s Love for Chávez Continues: While President Hugo Chávez of Venezuela lies ill in Cuba, his many fans still flock to the streets at home in support.

CARACAS, Venezuela — President Hugo Chávez’s supporters have not ruled out swearing him in from his hospital in Havana. His detractors are calling for government investigators to go check his pulse themselves. The justices whom Mr. Chávez’s allies have named to the Supreme Court have decided that he can continue to govern in absentia.

Despite Illness, Chávez Will Be Sworn In

A woman walked past a wall plastered with election campaign posters of President Hugo Chávez of Venezuela in Caracas on Wednesday.

In a country that Mr. Chávez has dominated for so long, his health crisis and the decision to proceed on Thursday with a quasi-presidential inauguration that he is unable to attend are producing a stream of bizarre developments and national angst about who is in charge.

“Who’s governing Venezuela?” Julio Borges, an opposition member of the National Assembly, said during a noisy legislative debate this week on the biggest issue facing the country, overshadowing other urgent matters like pressures for a painful currency devaluation, stagnant oil production and chronic shortages of food and other staples on store shelves.

Mr. Chávez has long said, “I am the people,” a mantra that his supporters are invoking as they plan to don the sash the president would have worn had he been able to attend his inauguration, symbolically becoming presidents themselves.

To no one’s surprise, the Supreme Court, full of Chávez loyalists, ruled on the eve of the ceremony that Mr. Chávez’s inauguration could be postponed and that his team of advisers could smoothly move, in his absence, from one term to the next.

The court declined to set a time limit for the swearing in, raising the possibility that the country’s deepening uncertainty could go on for weeks or months. And it did nothing to clear up the stubborn mystery of the president’s condition.

Luisa Estella Morales, the president of the Supreme Court, said Wednesday at a news conference that there was no need at this time for a delegation to go to Cuba and report back on the condition of Mr. Chávez, 58. Asked if the swearing in could occur in Havana, she said the time and place of the ceremony had not been determined.

“It’s one of the most important values that we should preserve as a constitutional court,” Ms. Morales said. “The sovereign Venezuelan people have expressed through their vote their desire to continue being governed by President Hugo Rafael Chávez Frías.”

The government has been opaque for months, acknowledging that he suffered from a relapse of cancer in the pelvic area, but not specifying the type of cancer or detailing his prognosis.

The lack of information has left Venezuela tied in knots. Mr. Chávez has loomed so large for so long — with speeches that have lasted for hours, frequent Twitter posts and his outsized singing, ranting, poetry-reciting and foe-bashing personality — that his sudden silence has created a sizable vacuum.

“We don’t have a president,” lamented Estela Martínez, 63, a nurse who has supported Mr. Chávez throughout his 14 years in office. She said she was afraid that the public was not getting the full truth about the president’s condition and that there was far more shouting than clarity from political leaders. “Someone has to take the reins of the country.”

Henrique Capriles Radonski, the opposition candidate who lost to Mr. Chávez in October, criticized the Supreme Court’s decision endorsing a delay in the inauguration. “Institutions should not respond to the interests of a government,” he said.

The State Department in Washington, which has been cautious about getting involved in the contentious political back-and-forth, said Wednesday that it would be eager to improve relations with Venezuela, which have long been strained.

“Regardless of what happens politically in Venezuela, if the Venezuelan government and if the Venezuelan people want to move forward with us, we think there is a path that’s possible,” she said, according to Reuters. “It’s just going to take two to tango.”

Mr. Maduro said last Friday that Venezuela’s ambassador to the Organization of American States, Roy Chaderton Matos, had held meetings with American officials starting in November that included discussions on the criteria for “normalized” relations between their countries, but he emphasized that the two sides continued to have significant differences. He also said Mr. Chávez had approved the talks. Before he left for Cuba in December, Mr. Chávez indicated that he wanted Mr. Maduro to succeed him should he be too ill to govern. But that proclamation, designed to quell a succession battle, has done little to calm the frayed country.

Neither did Mr. Maduro’s letter on Tuesday announcing that Mr. Chávez’s doctors had recommended that he not attend the inauguration and instead continue recuperating in bed. That led some of the president’s critics to wonder why the voluble Mr. Chávez was not telling them himself.

“If the president is in full command of his faculties, why didn’t he sign the letter?” said José Gregorio Graterol, an opposition lawmaker.

And for those Venezuelans who bitterly resent the influence that the Cuban leaders Fidel and Raúl Castro have over Mr. Chávez — especially given Cuba’s dependence on Venezuelan oil shipments on preferential terms — the president’s long stay in Cuba and the constant traveling back and forth to the island of top Venezuelan officials, the letter emanating from Havana was simply too much.

“How do we know that letter isn’t from the hand of Raúl Castro and the Cuban advisers?” Mr. Graterol said.

In the constitutional fight that has ensued over whether Mr. Chávez can legally start a new term without showing up for the scheduled swearing in, both sides in Venezuela have at times seemed to stake out shifting constitutional ground as they have angled for political advantage. The opposition is arguing that the Constitution calls for the head of the National Assembly, Mr. Cabello, to become the caretaker president in Mr. Chávez’s absence.

Mr. Cabello, a staunch ally of Mr. Chávez, is normally reviled by the opposition, and its position seems designed to foment dissension among Chavistas, as Mr. Chávez’s backers are known.

The government’s most recent reports on Mr. Chávez’s health had him fighting a severe lung infection and having difficulty breathing, and it was not known if he would be able to watch television to see the thousands of supporters who will attend the rally in his name. But the show must go on, as Mr. Chávez said in a moment of adversity last year, only this time without him, although with a roster of foreign leaders on hand.

“Crisis?” asked Jorge Rodríguez, a Chávez stalwart who is the mayor of a section of Caracas, according to El Universal newspaper, dismissing the notion that anything was amiss. “Where is the crisis?”