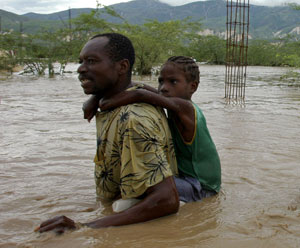 MIAMI — Tropical Storm Chantal dissipated over the Caribbean on Wednesday, but its remnants threatened to bring heavy rains to Haiti and the Dominican Republic, U.S. forecasters said.

The Miami-based National Hurricane Center said Chantal, the third named storm of the 2013 Atlantic hurricane season, broke up east of Jamaica. It never posed a threat to U.S. oil and gas operations in the Gulf of Mexico.

Issuing its last advisory on the storm, the center said Chantal was 230 miles east-southeast of the Jamaican capital, Kingston, at 5 p.m. EDT. It was moving west at 23 mph, with top sustained winds of 45 mph.

The storm’s remnants are forecast to move between Jamaica and Haiti and then cut across central Cuba.

As much as 3 to 6 inches of rain could fall in Haiti and the Dominican Republic, the center said.

Heavy rains are a particular threat to Haiti. The poorest country in the Americas, Haiti is vulnerable to flash flooding and mudslides because of its near-total deforestation.