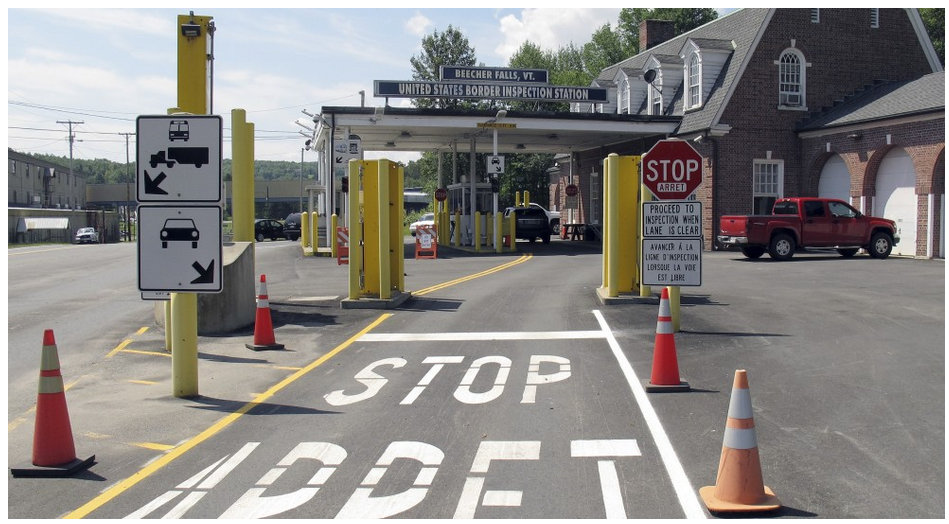 In Sept. 2017, Daniel Gault drove past the Nantucket house where his friend Isidro Lemus had lived for more than a decade. Lemus was no longer there, and the house was abandoned.

Lemus, a painter and carpenter, had quietly left the island for Canada. After being turned down for a green card and seeing family membersand friends taken away in handcuffs by immigration agents, especially in the first year of Donald Trump’s presidency, Lemus decided he had had enough.

“It was Monday morning,” he recalled as he sat at the dinner table in his new apartment in Sherbrooke, about 100 miles east of Montreal. “And with my wife and my two kids I took off and kept driving to Vermont, to, you know, a different land, the border, a different country. I was kinda getting nervous. I get to the window and the officer slide[s] that window up and he’s like, ‘Bonjour! Come in.’ And I said, ‘Really?’ … And I looked back into the U.S. territory, and he looked back too, and he said, ‘It’s fine, they can’t do anything to you here.'”

More than 300,000 immigrants nationwide are in the U.S. on temporary protected status (TPS), a 1999 policy intended to protect foreign nationals living in the U.S. from being returned to their home country if it is unsafe. In 2017 and 2018, the Trump administration canceled TPS for Haiti, Nicaragua, El Salvador, Nepal, Honduras and Sudan. The federal courts have blocked cancellations for these countries for the time being, but many, like Lemus, are heading to Canada rather than waiting for the other shoe to drop in the U.S.

But Canada is not a “promised land” of open borders, some immigration advocates warn. Some migrants from the U.S. are favored over others. And how much longer the Great White North will keep its doors open remains to be seen.

In 1989, when he was nearing 18 years old,Lemus crossed the Rio Grande into the United States without legal documents to join his older brother. It was a long journey from El Salvador, through Guatemala and Mexico, that brought him first to Boston and then to Nantucket.

Lemus recalled about 10 years ago, when he was wrested from his sleep in the middle of the night by U.S. immigration agents, as his son looked on.

“And that was when the whole nightmare start[ed],” he said.

Lemus was detained, separated from his family and deported to El Salvador. He made his way back to the United States, legally, but he said he always felt under suspicion by U.S. authorities. By 2017 he had had enough, and he packed up his family for the drive north.

It was family ties — what the Trump administration derisively describes as chain migration — that allowed the Lemus family to settle here. His sister is a Canadian citizen. That policy has been key to a surge of immigrants — particularly Haitians —relocating to Canada

Of the 9,800 Haitians living in the U.S. who applied for asylum in Canada in 2017 and 2018, most had family ties in Canada that go back decades. At Maison d’ Haitiin Montreal, which assists new immigrants in finding housing and schools, Daisy Alcindor said Haitians who have come to French-speaking Quebec from the U.S. have done comparatively well.

“Haitians that actually lived in Boston and then migrated to Montreal, their life experience is better, generally speaking,” she said. “They have access to accommodations a lot easier. Their dollar goes further to get those basic needs.”

“Canada selects people on a merit-based system, and the better educated increases their chances of being selected,” he said.

Cohen has represented dozens of professionals who arrived in the U.S. on H1B visas — used by companies to fill so-called hard to-recruit-for positions. Moreover, a new Trump administration executive order now forbids the spouses of H1B visa holders from working in the U.S. But Canada is more than happy to welcome overseas professionals who have already been vetted by the Americans. Canada even expedites their migration through a process known as Express Entry.

Canada is bracing for many more immigrants because of dramatic changes to U.S. immigration policy, opening its arms to as many as 340,000 newcomers this year and next. It is not clear how long those doors will stay open. Canada already rejects low-skilled immigrants who cannot prove fear of political persecution in their home countries, as well as TPS holders who have claimed asylum in the U.S.

National elections are in October, and Prime Minister Justin Trudeau’s ruling Liberal Party is facing a major challenge from the opposition Conservatives, who like Trump, want tighter immigration policies. Conservatives favor immigrants who are self-sufficient and less likely to come from poorer nations. The Conservative Party is ahead in the polls.

The ‘Promised Land’ For Some

Even so, in comparison to the U.S., Canada is, indeed, a promised land, said Lemus. He said in their two years in Sherbrooke, the family has found a church and a community, and his two children are doing well in school. Lemus’ son Erick said he no longer fears his father being taken away by immigration authorities in the middle of the night.

And, Lemus has found work here. Lots of it. The skills he perfected on Nantucket — carpentry, appliance maintenance, plumbing and painting — are all being put to use in his new country. In Canada he has found a community of immigrants from Syria, Afghanistan, Bosnia, Haiti and elsewhere. Lemus said he and his son soon plan to take a fishing trip to the Missisquoi River, which separates Quebec from Vermont, to cast their rods into the cold, fast-moving water and look across the border without regrets.