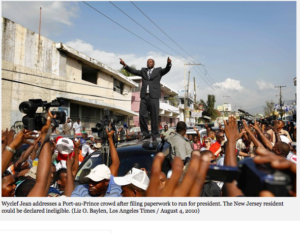 The hip-hop artist’s presidential run generates excitement. But some Haitians are skeptical whether he has what it takes to lead the beleaguered nation — if his candidacy is even legal.

Wyclef Jean‘s candidacy for president of this rubble-strewn country gives a charge of electricity to what so far has been feeble interest in upcoming elections. But the heroic narrative he’s pitching — hip-hop superstar returning from America to rescue his homeland — will quickly get battle-tested in the fractious, murky and often violent world of Haitian politics.

Jean’s humanitarian organization, Yele Haiti Foundation, and his status as the most famous member of Haiti’s diaspora give him immediate prominence. Young people, for the most part, seem to love him.

“Bon bagay,” said Saintil Wilson, 22. “Good thing. We need somebody who is younger and stronger and has more power to run Haiti.”

Other young men standing nearby in a seaside slum agreed, although Wilbur Alben, 62, building cabinets in the shade, gave a more wizened view. “I don’t care,” he said. “At this point, give me anything. I’ll take it.”

When someone mentioned the current President, Rene Preval, Alben swiped his hand as if a fly were bothering him.

What is telling is that this conversation occurred in the Cite Soleil slum, a fulcrum of populist power in the country and a crucial base of support for exiled President Jean-Bertrand Aristide, who still looms large in Haitian politics. Jean had called for Aristide to step down in 2004 — a potentially lethal statement in this part of town — yet he has managed to maintain support there.

Jean, 39, might need to do more convincing among members of the intellectual and political class, many of whom are skeptical that he could legally qualify as a candidate, much less govern this country.

“First, he doesn’t know how the state works,” said Laennec Hurbon, a prominent Haitian sociologist. “He hasn’t any knowledge of the political parties. This is not a good thing for democracy in Haiti.”

The power in Haitian government resides with the prime minister, appointed by the president and ratified by both houses of Parliament. The prime minister can be fired by Parliament, which has been a persistent source of instability in the country. Preval, as shrewd a politician as any in Haiti, was stymied repeatedly in his choices for the position in his second term — two of his prime ministers were fired.

Michele Montas, a journalist for 38 years and now a special advisor to the head of the United Nations mission in Haiti, said the president must build a majority in both chambers of Parliament to accomplish anything.

“I wish Wyclef the best,” she said. “He is my friend. Can he be president? That’s not easy.”

She noted that Jean, who has not lived permanently in Haiti for about 30 years, doesn’t speak French, and his Creole is far from flawless. “Everything is done in French and Creole in government,” she said. “There is no English.”

Montas knows firsthand how serious politics in Haiti can be. Her late husband, Jean Dominique, a radio broadcaster who crusaded against dictatorship and corruption, was assassinated in 2000. She herself survived an assassination attempt that killed her security guard.

“His announcing on ‘ Larry King‘ is very peculiar,” Montas said. “I don’t think the U.S. public is voting.”

Jean had preempted his official announcement on CNN several times before his scheduled appearance Thursday on “Larry King Live.” Earlier Thursday, he registered at the electoral council office on Route de Delmas in Port-au-Prince for the Nov. 28 polling. He stood on his car in a black suit and spoke briefly to the news media and about 200 jubilant supporters.

“My father always told me life without sacrifice is not worth living, so today I take on the greatest sacrifice that a man can take on in the 21st century,” he said. “I’m running for president for my country of Haiti.”

What makes his critics nervous is that, although they are dubious of his abilities, they are not sure that he won’t win. Which is why many are withholding comment. No one wants to be on the wrong side of power in Haiti.

Even the business elite often keep quiet until they spot a front-runner.

Reginald Boulos, head of the Haitian Chamber of Commerce, declined to comment until after he saw Jean’s interview on “Larry King Live.”

Fritz Mevs, a member of one of the handful of families that control the economy in Haiti, was only slightly less circumspect.

Get dispatches from Times correspondents around the globe delivered to your inbox with our daily World newsletter. Sign up »

He spoke only obliquely about Jean, saying the candidates that make the most noise early in the race rarely win.

“Whatever the international community is talking about has nothing to do with reality. We have to look at the candidate not being mentioned,” he said. “Find the person who is silent. That’s a Haitian tradition.”

Mevs is correct that all this discussion of Jean may be for naught.

The Haitian Constitution requires candidates be citizens of only Haiti and residents of the country for the last five years. Jean’s primary residence is in New Jersey. A nine-member electoral council will decide whether he has spent enough time in Haiti to qualify. In the last election, in 2006, the council rejected the candidacy of Texas businessman Dumarsais Simeus because he is a U.S. citizen.

Aristide’s Lavalas party, barred from the election, has jumped on the residency issue and is painting Jean as a puppet of U.S. interests and the business elite.

But on the streets, Jean’s story has inspired many youths stuck in poverty.

Jean left his hometown east of Port-au-Prince for Brooklyn when he was 9. He found fame and won a Grammy with the Fugees, and went on to a successful solo career.

He started his Yele Haiti Foundation after Hurricane Jeanne devastated the city of Gonaives in 2004, killing more than 3,000 people. It primarily gave scholarships to schoolchildren. In one effort in Port-au-Prince, it paid people to clean trash out of the slums — the workers wore yellow Yele T-shirts — earning him credibility in areas hostile to almost any outsider at the time.

After the Jan. 12 earthquake that killed more than 200,000, Jean and his group took a high-profile role in getting the world to donate to the relief effort. But Yele quickly came under scrutiny for paying Jean and companies connected to him. For instance, in 2006, when the group had $1 million in revenue, it paid Jean $100,000 for performing at a benefit concert and paid $250,000 to a television station and production company that he had a controlling interest in, according to news reports.

Jean acknowledged that the group made mistakes and hired a new accounting firm. By July, Yele had raised $16 million for earthquake relief, according to the Chronicle of Philanthropy.

In Fort National — a neighborhood so devastated by the quake that government planners want to raze much of it — a reporter asked men rebuilding a tin house what they thought of Jean.

A middle-aged man named Christian Bonhomme reacted in quick fury. “Who’s going to vote for that … ? What the hell does Wyclef know about politics? That’s why Aristide [a former priest] messed up the country, because they put in a preacher as president.”

Younger men started arguing with him. “The government is crooks,” said Toussaint Ulrick, 25. “They are not going to do anything for us. I think maybe a new president could help. I’ll vote for Wyclef.”

The reporter eventually walked away as dusk came. The group was still vigorously arguing.

If Wyclef is really serious about this he should make sure his key people in Haiti are untainted by the cocaine business.

Several key people around him are known cocaine traffickers.

Popularity with the young might get him elected, if the Electoral Council violates constitutional requirements demanding 5 year residence before filing papers. What happens afterwards could be a disaster for and already destroyed nation as a naïve, inexperience3d guy….who already has major management problems in the States….. tries to run a nation. If he cannot run his own business, he will simply carry his incompetence into Haiti.

Wyclef would have been better off supporting a competent candidate, like Jean Henry Ceant his personal notaire.

5 thoughts on “Can Wyclef Jean save Haiti?-Added COMMENTARY By Haitian-Truth”