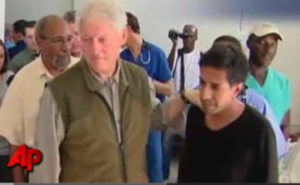 CHAPPAQUA, NEW YORK – Former President Bill Clinton was recovering at his suburban home Friday after leaving a Manhattan hospital where he underwent a heart procedure.

Three black SUVs with tinted windows arrived around 7:45 a.m. Friday and pulled through the high gates at the house. The hamlet of Chappaqua is about 35 miles north of New York City.

“He looks forward in the days ahead to getting back to the work of his Foundation, and to Haiti relief and recovery efforts,” it said.

Terry McAuliffe, the former Democratic National Committee chairman and a close friend of the Clintons, told CBS television that he expects Clinton will get back to work quickly.

“If I know President Clinton, he’ll be on the phone  calling people asking for more help for Haiti and where he can get pickup trucks so they can deliver food or generators. If I know Bill Clinton, he’ll be raring to go in about 35 minutes,” McAuliffe said.

Clinton, 63, could be back at work as soon as Monday, cardiologist Allan Schwartz said previously.

Clinton had quadruple bypass surgery at the same hospital more than five years ago, and returned Thursday to have a clogged heart artery opened after suffering discomfort in his chest.

Two stents resembling tiny mesh scaffolds were placed inside the artery as part of a medical procedure that is common for people with severe heart disease.

Schwartz said tests had showed that one of the bypasses from the surgery was completely blocked.

Instead of trying to open the blocked bypass, doctors reopened one of his original blocked arteries and inserted the two stents. The procedure took about an hour, and Clinton was able to get up two hours later, Schwartz said.

There was no sign the former president had suffered a heart attack, and the new blockage was not a result of his diet, Schwartz said.

McAuliffe said Clinton participated in a conference call on earthquake relief as he was wheeled into an operating room.

“An aide had to literally take the phone away from him,” he said.

Secretary of State Hillary Rodham Clinton traveled from Washington to New York to be with her husband. She left the hospital at about 11:30 p.m. without speaking to reporters.

Aides to Mrs. Clinton said she still planned to go ahead with a previously scheduled trip to the Persian Gulf. The trip was to begin Friday afternoon, but now she is planning to leave Saturday so that she does not have to rush back to Washington.

Clinton’s daughter, Chelsea, was also with him at the hospital.

In an angioplasty, the procedure Clinton had on Thursday, doctors thread a tube through a blood vessel in the groin to a blocked artery and inflate a balloon to flatten the clog. Often, one or more stents are used to prop the artery open.

The angioplasty is usually done with the patient awake but sedated. It’s one of the most common medical procedures done worldwide. More than a million angioplasties are done in the United States each year, most involving stents.

“It’s not unexpected” for Clinton to need another procedure years after his bypass, said Dr. Clyde Yancy, cardiologist at Baylor University Medical Center in Dallas and president of the American Heart Association.

The sections of blood vessels used to create detours around the original blockages tend to develop clogs five to 10 years after a bypass, Yancy explained. New blockages also can develop in new areas.

“This kind of disease is progressive. It’s not a one-time event so it really points out the need for constant surveillance” and treating risk factors such as high cholesterol and high blood pressure, he said.

The former president has been working in recent weeks to help relief efforts in Haiti. Since leaving office, he has maintained a busy schedule working on humanitarian projects through his foundation.

Clinton’s reputation as an unhealthy eater was sealed in 1992, when the newly minted presidential candidate took reporters on jogs to McDonald’s. He was famously spoofed on “Saturday Night Live” as a gluttonous McDonald’s customer.

Friends and family say Clinton changed his eating habits for the better after his bypass surgery.

“He has a brutal schedule.  He travels more than 200 days a year, working on his global initiative, helping people,” McAuliffe told CBS. “I hear people say, ‘Will he slow down?’ That’s not President Clinton. If anything, he’ll redouble his efforts if there’s actually time to redouble what he does.”

But should Clinton slow down a little?

“Yeah, probably,” McAuliffe said. “But he’s been doing this for 63 years and you’re not going to change him.