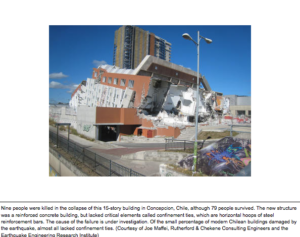 When the Nazca tectonic plate off the coast of Chile plunged under the South American plate in the early hours of Feb. 27, the colliding masses unleashed an earthquake so powerful it may have shifted Earth’s axis three inches.

Yet most of Chile’s newer buildings withstood the magnitude 8.8 quake with little or no structural damage. As of March 19, however, Chilean officials said 452 people are confirmed to have been killed because of the earthquake, most from a tsunami it created.

Experts note this quake was hundreds times more powerful than the 7.0 quake that hit Haiti on Jan. 12, yet had a far lower toll on human life. More than 220,000 are estimated to have died under collapsed buildings in Haiti, which has no recognizable building code.

“The take-home lesson is you build it right, and it’s going to do fine,” said Walter Mooney, a geophysicist with the U.S. Geological Survey in Menlo Park, back from his mid-March trip to assess damage in the country.

Scores of earthquake experts like Mooney flocked to Chile shortly after the earthquake, in part to assess how well buildings constructed to modern codes held up under the fifth largest earthquake in recorded history.

Engineers and other researchers commonly visit the site of major earthquakes worldwide, particularly those in urban areas, to glean invaluable information

about the real-life effects of earthquakes. But they say the greatest value comes from sizing up those built to the highest standards and inspected carefully — like those in Chile and California — to determine if the state of the art in construction science needs refinement.

“The well-designed buildings both in Haiti and in Chile performed well,” he said.

Mooney also visited Haiti shortly after the earthquake there. A large new store constructed with modern standards was virtually undamaged, he said, and was open the day after the quake.

Joe Maffei, a structural engineer with Rutherford & Chekene in San Francisco, joined more than 20 experts dispatched to Chile by the Earthquake Engineering Research Institute in Oakland to evaluate damage from the earthquake.

Most of the country’s newer mid- and high-rise buildings are made of reinforced concrete, and only a small percentage failed; Maffei said a Chilean expert put the figure at a fraction of 1 percent. And of those that did have partial or full collapses, almost all lacked a critical design element called “confinement ties,” horizontal hoops of steel reinforcement bars wrapped around vertical rebars.

The Chilean building code doesn’t always require these confinement ties. And some Chileans acknowledged that not adopting the section of California code that does require them led to the building failures, said Bill Holmes, also a structural engineer with Rutherford & Chekene who joined Earthquake Engineering Research Institute group.

The most troubling take-home lesson for Holmes was the poor performance of hospitals during the Chilean earthquakes. And hospitals in the United States, especially those outside of California, have comparable vulnerabilities, he said.

Holmes was sent to focus on how hospitals fared, and he said that while there was little structural damage, the nonstructural damage — such as fallen ceilings, broken pipes, power outages and elevator malfunctions — created havoc in several hospitals he visited. And they led to the worst-case scenario for any hospital personnel to cope with during a national disaster: evacuation of the facility.

“It was absolute chaos,” Holmes said. The powerful quake hit at 3:34 a.m. local time, and the ground shook for two minutes. During the time, many hospitals were plunged into darkness, elevators stopped working, broken water pipes sprayed personnel and patients and flooded wards.

Hospital staff had to carry patients out down darkened stairwells filled with rubble, he said, and then there was nowhere to take them.

Of the 14 hospitals he visited, “three patients died, all from heart attacks” in the aftermath of the quake, Holmes said. “No patient died from (building) damage or lack of medical care.”

Given the medical equipment, complex wiring, and miles of pipe threaded throughout modern hospitals, among other building elements, it’s extremely challenging to brace everything against shaking, he said. California hospitals, which following the 1994 Northridge earthquake have been required to meet some of the strictest seismic safety standards for any facilities worldwide, are highly likely to perform better than the Chilean hospitals, since the new code for hospitals also focuses on securing nonstructural elements. But perfection is hard to attain in that realm, and one broken pipe can still prove highly disruptive.

But hospitals in seismically vulnerable areas outside of California, such as Seattle, parts of Utah, South Carolina and Tennessee, could face similar scenarios as Chile in a major quake, even if the building remains structurally sound, Holmes said.

Another lesson from Chile, Holmes said, was the role of a strong government in preventing major loss of life during an earthquake. He described a Brookings Institution paper published March 5 that correlated the overall effectiveness of Chile’s government, and its lack of corruption, with the relatively low death toll from the earthquake.

Earthquakes in other countries at lower magnitudes than Chile’s have caused much greater loss of life, such as the magnitude 7.9 earthquake in China in 2008 that claimed some 88,000 lives, the 8.0-magnitude earthquake in Mexico in 1985 that killed 9,500, and the 7.6-magnitude quake in Pakistan in 2005 that left 86,000 dead.

“The knowledge is there in all these countries,” he said. “The difference is when the rubber meets the road, it doesn’t happen there, because the economic pressures are such that people want to build buildings as fast as they can.”