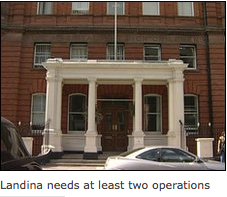 A three-month-old girl who was pulled from the rubble after the earthquake in Haiti is to undergo life-saving surgery at leading London hospitals.

Landina Seignon suffered head and arm injuries when the hospital where she was being treated for a burn collapsed in January’s quake.

Following fears that she had days to live, the Facing the World charity was given permission to take her to London.

Landina needs at least two operations, including one to reconstruct her skull.

She was flown into Gatwick Airport on Friday and was taken to London’s Great Ormond Street Hospital.

Facing the World said it took seven days to arrange the paperwork to move Landina, who had an arm amputated after the quake, from the Haitian capital, Port-au-Prince.

A spokesman for the charity said: “The Facing the World medical team will treat Landina at both Great Ormond Street Hospital and the Chelsea and Westminster Hospital in London where she will receive the high level of care and experience that she needs.

“As always the surgical team are donating their services. Without everyone involved, Landina would not be here.”

At least 217,000 people were killed when the 7.0-magnitude earthquake struck south-west of Port-au-Prince on 12 January.

Ceremonies were held across Haiti on Friday, exactly one month after the disaster took place.

More than a million Haitians remain homeless, just as the rainy season is due to begin.

The government says the seasonal rains could be the biggest threat now to the nation’s attempts at recovery.