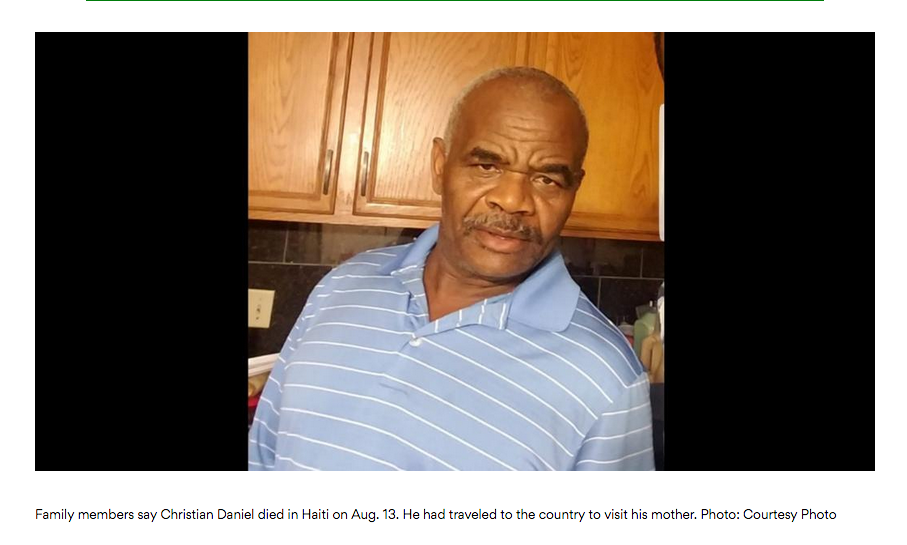 An Austin man who traveled to Haiti to visit his mother was killed by unknown attackers shortly after he arrived on Aug. 13, according to relatives.

Christian Daniel, 65, left Haiti to come to the United States in the 1990s. He had since become an American citizen and an important part of his community near Rundberg Lane as a handyman who would fix things for his friends and neighbors, relatives said.

Daniel’s niece Vanessa Bissereth said that before his trip in mid-August, Daniel had told his family he was planning to bring food to his mother’s village and make repairs for the residents, just as he’d done in Austin.

However, Bissereth said that after Daniel landed in Haiti, three men attacked him in a taxi as he was leaving the airport and shot him to death.

“It’s like as soon as he got there, walking from the airport, he was murdered. Somebody knew he was coming, didn’t like the fact that he had accumulated a lot of things in America and they killed him,” Bissereth said. “That’s just how Haiti is, and somebody set him up.”

Bissereth said Daniel’s family in the United States learned of his death from relatives in Haiti.

A U.S. State Department official comfirmed that authorities are aware of reports of the death of a U.S. citizen in Haiti.

“We are providing all appropriate assistance to the family and offer them our sincerest condolences on their loss,” officials said.

Daniel left behind his wife Vespa, his 20-year-old son Don who studies at the University of Texas, and his 14-year-daughter Kristine, Bissereth said.

The family is now struggling to get his body back to the U.S.

Bissereth started a GoFundMe page to help cover the costs of bringing Daniel’s body back to Austinand additional funeral expenses.

“Christian was and will continue to be the single greatest humanitarian found in the lives of those who knew him. His mere presence made others around him uplifted in spirit, joyful in conversation and finding wide smiles suddenly emerging across their faces with no effort whatsoever,” the page said.

COMMENT: HAITIAN-TRUTH.ORG
Sad to see how the security situation has deteriorated in the years since Aristide/Lavalas disrupted the infrastructure, forever shattering law-and-order as Haiti had known it. aristide’s illegal disbanding of our FAdH and creation of an Aristid controlled PNH, has left Haiti in constant threat of violence.

This incident is simply a reflection of what can happen to a society over a short period of time.