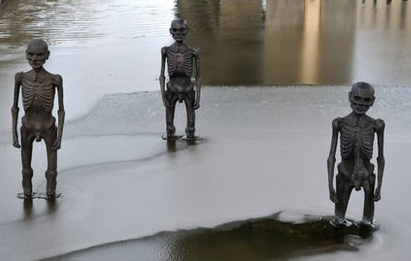 – Supporters of former Haitian President Jean-Bertrand Aristide marched through Port-au-Prince on Wednesday calling for his return from exile and protesting his party’s exclusion from upcoming elections.  Several hundred protesters joined in the protest march, which marked Aristide’s rise to power as Haiti’s first democratically elected president in December 1990.  The demonstrators accused the government of President Rene Preval, a one-time Aristide ally, of planning a fraudulent legislative ballot on February 28 and said they would boycott the vote in the impoverished Caribbean nation.  Aristide’s populist Fanmi Lavalas political movement has been banned from participating in the election on grounds it failed to meet the legal requirements for registration.  “There will be no election in February, there will be a selection. What the authorities are planning is really a big farce,” Dr. Maryse Narcisse, a leading member of Aristide’s party, told Reuters.  “The president and election officials are the masterminds behind the plan to exclude the majority of the population from the vote,” said Narcisse, who spoke as she marched with others through the streets of Port-au-Prince. No one in Preval’s cabinet was immediately available for comment.

Aristide, a firebrand former Roman Catholic priest, was ousted in a 1991 military coup and restored to power three years later under a U.S. military occupation.  He won a second presidential election in 2000 but fled Haiti in 2004 in the face of a bloody armed rebellion and under U.S. and French pressure to quit. He had faced accusations of despotism and corruption, charges he repeatedly denied.  ”We want Aristide back here now. He is our leader and Preval is a traitor,” said Moise Sanon, a 30-year-old demonstrator, wearing a Haitian flag and a poster emblazoned with Aristide’s image. (Editing by Anthony Boadle)
—————————————————————

COMMENT BY HAITIAN-TRUTH.ORG
First of all, we should stop swallowing the claim that Aristide was the first democratically elected president in Haiti’s history. There were five others before him, including Francois Duvalier. “He faced charges of despotism and corruption, which he denied. Of course he denies the charges. All criminals do. However, the DEA and Justice Department have dossiers that could put him away forever. That is why a normally vocal Aristide remains quiety in South Africa.
To boycott the election will simply give Preval what he wants- THE POWER. He doesn’t give a damn if anyone votes at all, knowing MINUSTAH, the UN, OAS, American government and the rest of the world community will accept whatever humiliation he deals them. They have done it in the past. Why should the future be any different??
Preval does not want an election in February.
If the idiots in the opposition boycott the ballot he will let the election proceed and accept power with a one percent vote – or less. If they opposition makes areal effort to participate, Preval will generate a situation in which the MINUSTAH people will state things are too unstable and dangerous for an election to be held.
Preval is the problem.
The can be no democratically coordinated elections with him in power. This of course, doesn,t leave a democratic alternative.