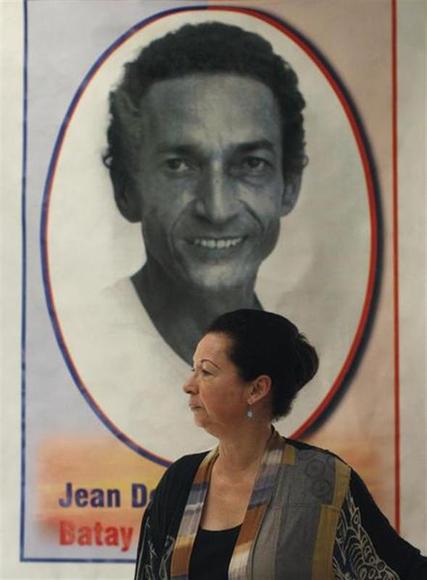 Michele Montas, a former spokeswoman for U.N. Secretary-General Ban Ki-moon is seen in front of a picture of her late husband Jean Dominique at her house in Port-au-Prince January 19, 2011.

(Reuters) – A judge concluded the investigation into one of Haiti’s most notorious political assassinations on Friday, accusing nine people of having a hand in the killing of radio journalist Jean Dominique, including several close associates of former President Jean-Bertrand Aristide.

Montas still sings the song of the victim, however, she and Rene Preval are directly, or indirectly complicit in the death of Dominique, Preval’s best friend.

Preval knew what was going to happen and called Montas, on the morning of the murder, asking her to stay home: He had something to discuss with her.

Montas stayed home, letting Dominique drive off to his death.

Where are the people from AMNESTY International when you need them.

Aristide and Preval are the real targets, as they waste time on attacking Duvalier.