UN, Logan Abassi, Reuters .
CANADIAN FORCES
Canadian troops have begun flying into the southern coastal town of Jacmel — bypassing the clogged airport in the country’s capital, Port-au-Prince. Canadian Forces personnel set to work in Jacmel, delivering food, water and medical assistance from HMCS Halifax offshore and through the DART — Disaster Assistance Response Team — which travelled from Port-au-Prince. “The first soldiers from Quebec, part of the 3rd Battalion, Royal 22nd Regiment, are already on the ground and hundreds more are en route as we speak,” said army chief Lieutenant-General Andrew Leslie. By midnight last night, he said, 1,000 Forces personnel and other Canadian officials will be in Haiti to help those without homes or basic necessities.
FOOD DISTRIBUTION
The World Food Program said 270,000 people had received emergency food assistance by Monday night and that violence had not hampered distribution of food rations. “We are looking at having 10 million ready-to-eat rations going out in the course of the coming week,” WFP spokeswoman Emilia Casella said in Geneva. That would feed half a million people three times a day for a week.
LOOTING
Hundreds of looters have been swarming damaged stores in downtown Port-au-Prince, seizing goods and fighting among themselves.
DEATH TOLL
The family of Canadian Alexandra Duguay, above, confirmed yesterday that her body has been found in Haiti. Ms. Duguay, 31, was a spokeswoman for the United Nations mission and was on the ground floor of the UN headquarters building when it collapsed during Haiti’s devastating earthquake last week. Some 699 Canadians remain unaccounted for. So far, 1,206 people have been evacuated from Haiti. The official Canadian death toll is 13. Tens of thousands of Haitians remain missing and officials expect the death toll to be anywhere between 100,000 and 200,000. Haiti’s Police Chief Mario Andresol said, “Yesterday downtown the looters simply outnumbered my guys. They could not control them.”
DONATIONS
Canadian have so far donated $40-million for Haiti relief, a figure that will be matched by the Canadian government. On top of that, the government has also made aid commitments totalling $135-million. In the United States, Americans have donated US$220-million for Haiti aid.
REBUILDING
Haiti’s biggest foreign investor, Irish telecom billionaire Denis O’Brien, said he was working alongside former U.S. president Bill Clinton to rebuild Haiti after the deadly earthquake with a “Marshall plan,” the U.S. initiative launched in 1947 to rebuild western Europe after the Second World War.
A LUCKY ONE 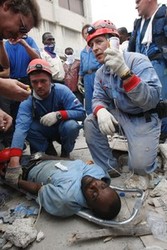 Pierre Louis Ronny, pictured, sits trapped under the Teleco Haitian building in downtown Port-au-Prince before being rescued yesterday. Mr. Ronny had his hand trapped between concrete blocks for the past week without food or water and was found by looters who were combing the building for goods. Some 52 rescue teams are trying to find people still alive under collapsed buildings, after saving 90 people.