When your father is a former U.S. President and your mother is the Secretary of State, having your wedding reception in the local pub isn’t an option.

Chelsea Clinton’s big day in a country mansion on Saturday could cost up to £3.2million.

No expense will be spared at what will be the American society event of the year, with the equivalent of £6,400 being spent on each of the 500 guests.

Guests are even being treated to porcelain portable toilets that flush, play music and have hot running water.

Miss Clinton is expected to hire between four and six Portaloo trailers – at a total cost of about £10,000. 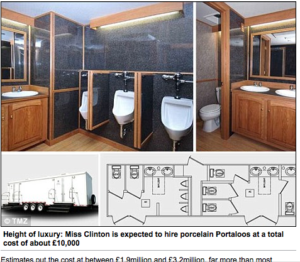 Estimates put the cost at between £1.9million and £3.2million, far more than most celebrity weddings.

When Liza Minnelli and David Gest tied the knot, it cost £1.6million, while Tom Cruise and Katie Holmes spent £1.2million.

‘This will definitely be the biggest wedding of the year,’ said Donnie Brown, a celebrity wedding planner.

Businesses in Rhinebeck have been getting into the swing of things, with banners bearing messages of congratulations hung inside cafe windows and outside shops.

And as the big day draws near, it seems Miss Clinton has been hitting the gym to look and feel her best. The wedding will take palce at Astor Courts in Rhinebeck, New York: 500 guests are expected to attend Spacious: The estate is the former home of millionaire John Jacob Astor IV Wedding tents? Canopies in the grounds of Astor Courts suggest preparations are well under way

The bride-to-be was spotted in New York yesterday leaving the gym after a work out.

After a quick change of clothes, Miss Clinton was snapped tucking into a tub of frozen yoghurt, but not before a spot of book shopping.

The rings will cost £3,500 each, alcohol and food for the main event and after party will come to £100,000, the equivalent of £200 per person, although the cake will cost £7,000 on its own with sugar flowers and fondants increasing the price.

Even mundane items like the stationery – invites, programmes and menus – will push the budget up, and are expected to come to a total of £32,000.

No expense has been spared with organisational matters either, and the rehearsal dinner alone cost £16,000 and a huge £320,000 has been earmarked for transporting guests to the event. Hilary Clinton looked relaxed as she arrived outside Chelsea’s apartment (left): She was accompanied by an assistant carrying a large dress bag

As for the toilets, they will be equipped with sinks with hot water, vanities for the ladies, marble interior and skylights with a male and female attendant in each trailer.

Wedding planner Claudia Hanlin said the final bill would be pushed up by the high quality demanded across the board.

‘Food and booze are already expensive, but the Clintons are reportedly hiring multiple vendors, which is one reason the food estimate gets so high,’ she said.

On the plus side, it looks like both sets of parents can afford it.

Mezvinsky is an investment banker at Goldman Sachs and the child of two politician parents, Marjorie Margolies-Mezvinsky and Edward M. Mezvinsky, both former members of Congress.

Marc and Chelsea were teenage friends in Washington DC and they became closer as undergraduates at Stanford University, California. Big day: Chelsea Clinton’s wedding to Marc Mezvinsky in a country mansion on Saturday could cost up to £3.2million

Bill and Hillary Clinton are also not shy of a dollar – since leaving office as president he has made a fortune from the lecture circuit and she is US Secretary of State, which carries an annual salary of £120,000.

The Clintons have have done their best to keep the guest list at a manageable number, forcing them to exclude many longstanding Democratic supporters.

A seat will doubtless be saved for President Obama should he attend – currently there are no plans for him to do so – but apart from that only those with a personal connection to the bride and groom have been invited.

Among the celebrities expected to attend, according to reports, are Oprah Winfrey, Steven Spielberg and Barbra Streisand, as well as former prime minister John Major.

Major donors to the party and dozens of acquaintances have been snubbed as the family tried to keep the list under 500 people.

‘We love you all but this is her wedding,’ Hillary Clinton said. Getting into the spirit: Local businesses have started to erect congratulations messages ahead of the big day