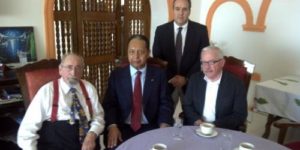 Justice Minister Paul Denis placed a great deal of pressure on the presiding judge to have Jean-Claude Duvalier arrested tomorrow morning when he attends his court hearing in the Parquet at 11:00 A.M. Wednesday, February 9th.

This will be a major error in judgment on the behalf of the Preval Administration.

The legal counsel of Edwin Marger, Congressman Bob Barr, and Mike Puglise are concerned about the newest developments and one of them is enroute to Haiti to observe.

3 thoughts on “Jean Claude Duvalier May Be Arrested When He Arrives in Court At the Parquet at 11:00AM Tomorrow”