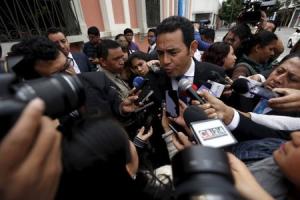 By Sofia MenchuGUATEMALA CITY (Reuters) – A Guatemalan comedian who has tapped into public anger over government corruption looks set to clinch the presidency on Sunday in a run-off against a former first lady struggling to distance herself from a discredited political establishment.

Pledging to clean up politics, Jimmy Morales, 46, won a first round of voting last month after an investigation into a multi-million dollar customs racket sparked the resignation and arrest of former leader Otto Perez and his ex-vice president.

Polls forecast Morales could win the decisive run-off by over 30 points against his rival, ex-first lady Sandra Torres, despite his lack of government experience and a tendency to float policy ideas that can appear improvised and eccentric.

“He could help Guatemala, seeing as he hasn’t been in a position to govern,” she said. “Let’s hope he’s not corrupt.” 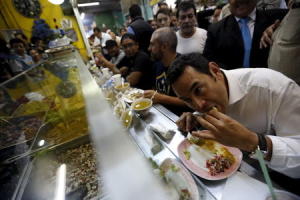 Mixing up his socially conservative pitch to voters with jokes recycled from a 14-year stint on a popular TV comedy show, self-proclaimed centrist and former theology student Morales has held up his mother as proof of his probity.

His center-left opponent Torres also vows to tackle corruption, as well as extend welfare programs that were a hallmark of the former presidency of Alvaro Colom, whom she divorced so she could launch an abortive bid for the presidency in 2011.

Critics say Torres, whose National Unity of Hope (UNE) party has traditionally fared well in poor rural areas, used her role as the head of a powerful welfare committee under Colom to make state largesse contingent on political loyalty.

Yet she argues that Morales would be a “leap of faith for the country” who is not up to the top job. “He would make a good sports and culture minister,” Torres told Reuters. 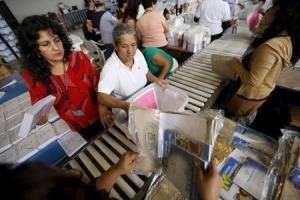 Employees pack electoral material and ballots in boxes, which will be distributed throughout the cou …

Among Morales’ ideas are a plan to tag teachers with GPS devices to ensure they attend class, as well as the suggestion that the impoverished, coffee-producing nation should mount a bid to retake land it has long disputed with neighbor Belize.

Such plans have invited ridicule from critics and Morales has also had to downplay historic ties between his National Convergence Front party and the army, which played a divisive and often brutal role in Guatemala’s 1960-1996 civil war.

The army also launched the career of fallen leader Perez, a retired general who is now in custody awaiting trial with his former vice president over their role in the customs racket.

Morales has said little about what he would do in office, beyond putting more money into justice, making government spending transparent and auditing institutions. He has also promised to give out smartphones to children.

“His proposals have been ideas that just occurred to him, improvisations,” said Hugo Novales, a political analyst at Guatemalan think tank ASIES.