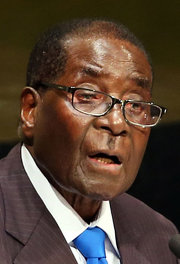 BEIJING — President Robert Mugabe of Zimbabwe has crushed political opponents in his country, and democratic challengers and their supporters have faced intimidation, jail and worse.

Mr. Mugabe, whose ZANU-PF party controls the levers of power, has presided over economic policies that have resulted in rampant inflation and poverty. Widely condemned by Western governments, he is considered one of the most uncompromising rulers in Africa.

Now he can claim the honor of being awarded a Confucius Peace Prize, the Chinese answer to the Nobel Peace Prize.

A group based in Hong Kong that says it is the official organizer of the prize has selected Mr. Mugabe as this year’s recipient. Among the finalists for the award were Secretary General Ban Ki-moon of the United Nations, President Park Geun-Hye of South Korea and Bill Gates.

The Confucius Peace Prize was first established in late 2010 as a rejoinder to the Nobel Peace Prize that was awarded that year to Liu Xiaobo, a dissident Chinese literary critic who is serving an 11-year prison sentence on a charge of subversion. His wife, Liu Xia, is under house arrest.

The Confucius Peace Prize ceremony is scheduled to be held in December. Organizers say the official Diaoyutai State Guesthouse in Beijing will be the venue if Mr. Mugabe, 91, agrees to attend. The prize comes with a financial reward of 500,000 renminbi, or nearly $80,000.

“The 21st-century interpretation of Confucianism is ‘universal harmony in the world,’ ” Qiao Wei, a poet and the president of the judging committee of the peace prize, said in a telephone interview on Thursday. “Mugabe is the founding leader of Zimbabwe and has been trying to stabilize the country’s political and economic order ever since the country was first founded. He brought benefit to the people of Zimbabwe.”

Mr. Mugabe had his start in politics as a Pan-African nationalist who opposed minority white rule in the former British colony and country then known as Rhodesia, now Zimbabwe. The Rhodesian government used brutal tactics to try to suppress nationalist movements, and Mr. Mugabe was imprisoned for more than 10 years, but the country finally achieved full independence from Britain in 1980.

Mr. Mugabe became premier and quickly set up an authoritarian system, including managing security forces that on occasion acted as death squads.

“As the president of Zimbabwe or the chairman of the African Union, he has always been pushing forward the cause of peace in Africa,” Mr. Qiao said. “He has been working hard even in his 90s. This shows he has ideals in his heart. He has been trying to support the independence of Africa. He has his ‘African Dream.’ ”

Mr. Qiao noted that the Confucius Peace Prize committee and the Nobel committee had both looked to Africa for candidates this year. The Nobel Peace Prize was awarded this month to the National Dialogue Quartet of Tunisia, a grass-roots pro-democracy group.

Critics in Zimbabwe and elsewhere were swift to condemn the honor given to Mr. Mugabe.

Mr. Qiao said he did not blame Mr. Mugabe for the soaring inflation that has crippled the country’s economy.

“Zimbabwe is a relatively small country in southern Africa,” he said. “It’s normal for the country to experience economic downturns for several or more than a dozen years. Even in many developed countries now, the economy is not ‘running’ all the time. It also halts or even goes backward.”

Last year, the Confucius Peace Prize was awarded to Fidel Castro, the former Cuban leader. In 2011, President Vladimir V. Putin of Russia won. The first recipient was Lien Chan, a former party chairman of the Kuomintang in Taiwan. He learned of the prize when journalists called for comment.

The prize has been mired in political battles. The founding committee had tenuous ties to the Chinese Ministry of Culture, but a split in the committee prompted the ministry to try to ban the prize in 2011. A rival group tried to award an alternative honor — the Confucius World Peace Prize — but that effort was called off.

Mr. Qiao said he registered his prize’s committee in Hong Kong, under the name China International Peace Research Center, and in Beijing, under the name Beijing Heweigui Culture Media Company, to keep the award going after the ministry tried to quash it in 2011.