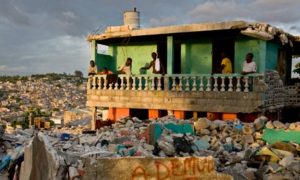 Bill Clinton has promised to get tough with countries which pledged billions of dollars in aid to earthquake-ravaged Haiti but have yet to deliver the money they promised.

Six months after the disaster that killed 220,000 people and left more than 1.5 million homeless, only $506m of $5.3bn raised at an international donors’ conference in March has been handed over, according to the United Nations Development Programme.

Only four countries – Australia, Brazil, Estonia and Norway – have so far given anything at all, the UN says. Two of the biggest promised contributions, $1.15bn and $1.32bn from the United States and Venezuela respectively, have been held up by delays in Congress and political red tape.

A frustrated Clinton, the UN’s special envoy to Haiti, said he would pick up the phone to world leaders to try to get the funds flowing more quickly.

“I’m going to call all those governments … I want to try to get them to give the money, and I’m trying to get the others to give me a schedule for when they’ll release it,” Clinton told CNN earlier this week. The American news broadcaster first brought the shortfall to light during a study of figures provided by the Interim Haiti Recovery Commission and a survey of donor nations.

He accepted that the aftermath of a lingering global recession had played some part in countries not yet delivering on their pledges. “I think that they’re all having economic trouble, and they want to hold their money as long as possible,” he added.

Glenn Smucker, an anthropologist who advises aid and development groups in Haiti, said: “President Clinton raises a legitimate concern. It’s easy to make pledges and harder to find the money, and you can’t take it for granted that all of the money will come through. But if you had all $5bn together in one place at the same time it would still be a tremendous challenge to spend it in an efficient and effective way.”

I will paraphrase that concept to an opinion on Bill Clinton, his Reconstruction Committee for Haiti and his overall performance in efforts to assist Haiti.

Where is God’s name has Clinton been for the past 5 months?? He just held the first meeting of his Haitian committee – with much public fanfare – in 5 months. It has been 6 months since the quake took 500,000 Haitians’ lives and Clinton has wasted 5 of them!!.

The handling of the Haitian disaster has been criminal in its lack of action.

Virtually nothing has been done as millions are wasted on academic studies and proposals….while people face the practical threats of disease, infections, starvation…a lack of shelter, schooling or any basic requirement for minumal life expectations.