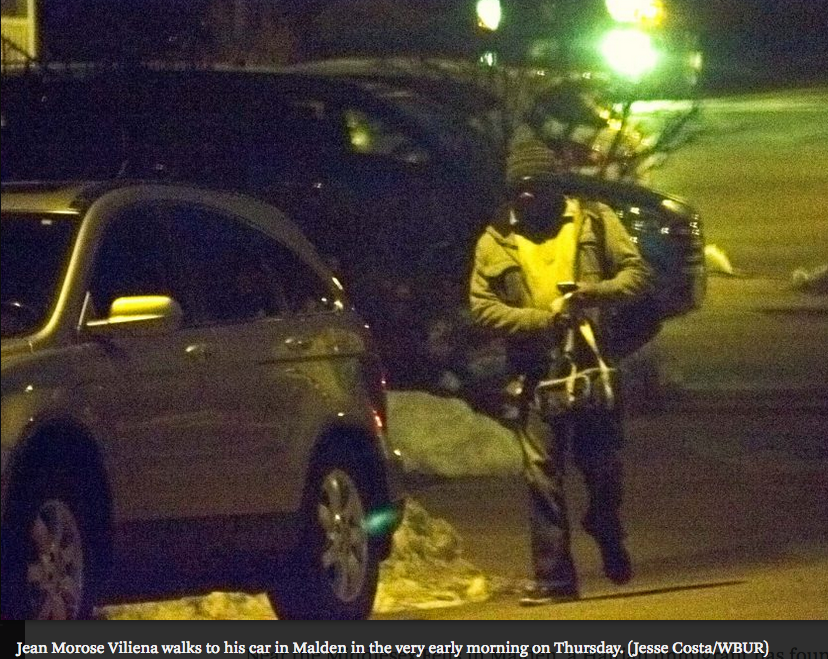 Near the Middlesex Fells in Malden, a Haitian immigrant has found quiet refuge for the past decade from trouble back home.

But he’s far from the typical immigrant fleeing violence or political turmoil.

In Haiti, Jean Morose Viliena stands accused of murder. But living here, he has escaped trial — in both his new country and his old one.

Some of his alleged victims are now trying to get justice by suing Viliena in this country.

‘The Criminal With No Conscience’

At first inspection, Viliena does not look like what President Trump describes as “a bad hombre.”

He appears to be a lawful permanent resident of the United States. He has a Social Security card and a Massachusetts driver’s license, both issued in 2008. And law enforcement sources tell WBUR that he comes up clean on criminal background checks.

But some of those who met him and knew him when Viliena was mayor of a small town in far western Haiti call him a violent thug. They accuse him of employing a paramilitary gang to rule by threats and terror. He has been under indictment in Haiti since early 2010.

“For those who do not know him, Jean Morose is the criminal with no conscience,” says David Boniface, through a translator.

Boniface is a teacher and a human rights advocate in Les Irois. He is also a plaintiff, along with fellow townsmen Juders Yseme and Nissage Martyr, in a civil suit just filed against Viliena in federal court here in Boston.

“He burned down 36 houses, he killed my brother, cut of Nissage’s leg, and he blinded Juders Yseme in one eye, and then fled to the U.S. to hide where he knows we cannot find him,” Boniface says.

Viliena was first elected mayor in 2006, and Boniface says he became an early target of the mayor when he stood up in a Haitian courtroom to testify against the mayor in July 2007.

After a townswoman accused the mayor of having beaten her with a pistol, Boniface accused Mayor Viliena of abusing power.

“He told me he would deal with me later,” Boniface says.

Viliena relied on a political machine called Korega. In Haiti, political machines often excel at getting out the vote, as well as getting out the guns. Political paramilitaries are called “chimères.” That night in 2007, Viliena allegedly armed his chimères with machetes, clubs, picks and guns, then led them to Boniface’s home to make good on his threat. Boniface wasn’t home.

“Since I wasn’t there, they killed my younger brother, Ecclesiaste Boniface,” he says.

According to the allegations in both the criminal indictment in Haiti and the suit just filed here, Viliena’s group dragged Eccliesiaste out of his house and into a mob. Ecclesiaste begged for his life. But witnesses in the indictment allege that Viliena denied his pleas.

“They shot him in the head and afterwards sliced him up with machetes, then they used a big rock to smash his head,” Boniface says.

Far Away, A Life In Malden

In Malden, far away, far from the cholera outbreak, far from the devastation of last year’s hurricane in Les Irois, far from the political and economic havoc, and far from the open indictment for murder, Viliena lives with his Haitian wife and a young son. He’s a 2016 graduate, with honors, of Bunker Hill Community College. Records indicate that Viliena has driven for Uber. He also has a Massachusetts commercial driver’s license — an alleged killer qualified for driving a school bus in America.

The lawyer who filed the civil suit says Viliena drives for the Eastern Bus Co. in Medford.

“He’s been a fugitive from the law for a number of years and we know that he’s also traveled back to Haiti within that time. In fact, he was reappointed to office,” says Scott Gilmore, staff attorney for the San Francisco-based Center for Justice & Accountability, the public interest law firm behind the lawsuit.

Their suit lays out a second episode of political violence that erupted at the start-up of Les Irois’ first community radio station. Mayor Viliena called in live to announce he was going to shut it down.

“He issue repeated threats against this radio station, then showed up at the house where it was operating with this armed crowd,” Gilmore says.

Nissage Martyr owned the house where the radio station rented a room.

“I agreed to have the station at my house because I know the media would serve the population,” Martyr says. “Jean Morose did not like the radio station and destroyed it because he knew that the population would become aware of the crimes he was committing.”

That assault allegedly began when Viliena rode up on a motorcycle. He distributed guns, including a shotgun, to the Korega paramilitary, who started firing in the air as they marched forward to invade the house.

According to victims and witnesses, Viliena grabbed Martyr and started pistol-whipping him while another associate beat a high schooler. When both victims tried to escape, Viliena allegedly ordered one of the gang to fire the shotgun. Martyr was shot in the leg. It would later be amputated above the knee.

As for that high schooler, Juders Yseme, “Jean Morose Viliena told someone to shoot me and he shot me and I lost my eye,” he says.

Viliena was arrested in the autumn of 2008. Provisionally released in December, he left — the suit says fled — for the U.S.

He’s been living in Malden since, apparently attracting neither attention nor interest from authorities. From Malden, he continued to travel back and forth to Haiti, still acting as mayor, despite an indictment in 2010 for complicity and commission of murder, and then a trial where he did not show up.

“Jean Morose is an eternal chimère,” Martyr says. “In 2009 he returned from overseas and burned down 36 houses. He never stays in the community. He comes, commits a crime, and then flees to the U.S. to hide.”

A second trial in Haiti in 2015, which convicted his co-defendants, was also the second trial where Viliena did not show up. The court ordered that he be tried in absentia. But that has not happened either.

So a fugitive from justice, charged with murder, attempted murder and arson, and now accused of crimes against humanity, lives in Malden, apparently as a lawful permanent resident with a license to drive a school bus and a mystery of how he did it.

The plaintiffs and the Center for Justice & Accountability are hoping someday to put him in the dock.

1 thought on “YOU CAN RUN BUT YOU CANNOT HIDE”