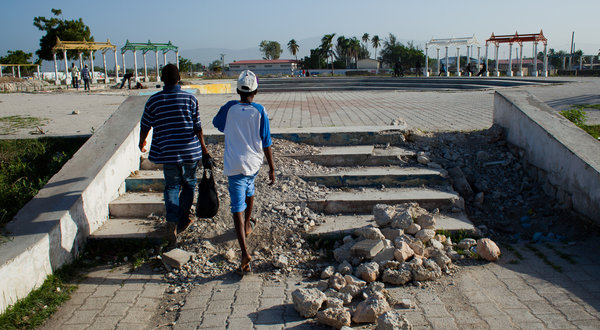 The charity Yéle allotted $230,000 for the revitalization of this Port-au-Prince plaza in the Cité Soleil slum, with no lasting results. More Photos »

PORT-AU-PRINCE, Haiti — In a new memoir, Wyclef Jean, the Haitian-born hip-hop celebrity, claims he endured a “crucifixion” after the Jan. 12, 2010, earthquake when he faced questions about his charity’s financial record and ability to handle what eventually amounted to $16 million in donations.

Portraying himself as persecuted like Jesus and Martin Luther King Jr., Mr. Jean, 40, writes with indignation about insinuations that he had used his charity, Yéle, for personal gain. He says he did not need to — “I have a watch collection worth $500,000”— and that doubters will someday understand “Yéle is Haiti’s greatest asset and ally.”

But on his book tour for “Purpose: An Immigrant’s Story,” Mr. Jean, who made an aborted bid for the presidency of Haiti after the earthquake, neglects to mention two key facts: a continuing New York attorney general’s investigation has already found financial improprieties at Yéle, and the charity effectively went out of business last month, leaving a trail of debts, unfinished projects and broken promises.

“If I had depended on Yéle,” said Diaoly Estimé, whose orphanage features a wall painting of Mr. Jean and his wife, “these kids would all be dead by now.”

Even as Yéle is besieged by angry creditors, an examination of the charity indicates that millions in donations for earthquake victims went to its own offices, salaries, consultants’ fees and travel, to Mr. Jean’s brother-in-law for projects never realized, to materials for temporary houses never built and to accountants dealing with its legal troubles.

On the ground in Haiti, little lasting trace of Yéle’s presence can be discerned. The walled country estate leased for its headquarters, on which the charity lavished $600,000, is deserted. Yéle’s street cleaning crews have been disbanded. The Yéle-branded tents and tarps have mostly disintegrated; one camp leader said they had not seen Yéle, which is based in New York, since Mr. Jean was disqualified as a presidential candidate because he lives in Saddle River, N.J., not Haiti.

This summer, the charity foundered.

At the end of August, Derek Q. Johnson, Yéle’s chief executive, announced his resignation to supporters.

“As the foundation’s sole remaining employee, my decision implies the closure of the organization as a whole,” wrote Mr. Johnson, a former Time Warner executive who replaced Mr. Jean at Yéle’s helm when the musician declared his candidacy in August 2010.

His resignation came after Mr. Jean declined to accept a settlement proposed by the attorney general covering the charity’s pre-earthquake activities, and he hired Avi Schick, a lawyer who had been a member of Attorney General Eric T. Schneiderman’s transition team.

The settlement would have required Mr. Jean and the two other Yéle founders to pay $600,000 in restitution “to remedy the waste of the foundation’s assets.” It also would have required Yéle to pay for a forensic audit of its post-disaster expenses, as it had done for its pre-earthquake finances, and to start “winding down its affairs.”

On Thursday, Mr. Jean’s spokeswoman said he and his lawyers “are working assiduously to resolve any pending issues with respect to Yéle prior to its closing as Mr. Jean continues his tireless commitment to his beloved country.” Neither the spokeswoman nor Hugh Locke, a Yéle co-founder, responded to specific questions.

Mr. Jean founded Yéle, a word he coined to mean “cry for freedom,” in 2004. Now 40, he had emigrated to the United States as a child, becoming an international star with his 1990s band, the Fugees. In his memoir, he says his journey from “a hut with a dirt floor” to “a mansion in New Jersey with Grammys on the mantle” motivated him to give back to his homeland.

But from the start Yéle was lax about accounting and tax filing, blurring the boundaries between its founders’ personal and charitable enterprises.

The forensic audit examined $3 million of the charity’s 2005 to 2009 expenses and found $256,580 in illegitimate benefits to Mr. Jean and other Yéle board and staff members as well as improper or potentially improper transactions. These included $24,000 for Mr. Jean’s chauffeur services and $30,763 for a private jet that transported Lindsay Lohan from New Jersey to a benefit in Chicago that raised only $66,000.

The audit considered it appropriate, though, for the charity to pay Mr. Jean $100,000 to perform at a Yéle fund-raiser in Monaco because that was his market rate. It also found it acceptable for Yéle to spend $125,114 on travel and other matters related to a “60 Minutes” report on “Wyclef’s mission to help the people of Haiti and his personal success story” because it appeared to have heightened awareness of Yéle. It was deemed legitimate to have spent $57,927 on private jets to fly Matt Damon and others to Haiti because they gave “substantial contributions” afterward.

Mr. Schick said of Mr. Jean, “While most of the audit findings and recommendations do not in any way relate to him, he is nevertheless committed to ensuring that things are made right.”

Yéle was small before the earthquake, with only $37,000 in assets. Immediately afterward, money started pouring in. Mr. Jean said he raised $1 million in 24 hours when he urged his Twitter followers to text donations. His charity also benefited alongside more established organizations like Unicef when he co-hosted MTV’s “Hope for Haiti Now” telethon with George Clooney.

In 2010, Yéle spent $9 million and half went to travel, to salaries and consultants’ fees and to expenses related to their offices and warehouse. In contrast, another celebrity charity, Sean Penn’s J/P Haitian Relief Organization, spent $13 million with only 10 percent going to those costs.

Some of Yéle’s programming money went to projects that never came to fruition: temporary homes for which it prepaid $93,000; a medical center to have been housed in geodesic domes for which it paid $146,000; the revitalization of a plaza in the Cité Soleil slum, where supposed improvements that cost $230,000 are nowhere to be seen.

There were questionable contracts, too: Mr. Jean’s brother-in-law, Eric Warnel Pierre, collected about $630,000 for three projects including the medical center and the plaza — what Yéle’s tax forms called “the rebuilding of Haiti.” Mr. Pierre did not respond to messages left for him.

And a Miami company called Amisphere Farm Labor, incorporated in 2008 and dissolved in 2009, received $1 million in 2010 to provide hot meals to displaced Haitians. Yet a Haitian caterer has sued Yéle for $430,000 in nonpayment for these very same meals, thus far succeeding only in getting the charity’s Haitian bank account frozen.

It is a tangled story.

A week after the earthquake, Lusmène Bien-Aimé was recovering in the Dominican Republic from the broken leg she suffered when her hotel, the Flamboyant, collapsed. King Kino, a well-known Haitian musician and a friend of Mr. Jean’s, proposed that she return to Haiti to prepare meals for Yéle, they both said. She and Mr. Jean sealed the deal on the phone, they said, and she hobbled from bed with her leg in a cast and crossed back into Haiti.

King Kino, whose real name is Lord Kinomorsa Divers, said he asked Amsterly Pierre, the president of Amisphere, to oversee the food operation. But Ms. Bien-Aimé said in an interview that she had never heard of Amisphere or of Mr. Pierre, a former licensed barber in Florida who runs a transportation business in Haiti. She said that two weeks after the disaster, she provided 8,000 containers of meat, rice and salad and Mr. Jean, cameras in tow, distributed them to earthquake victims.

Mr. Divers said she had overcharged, “taking advantage of the emergency.” Yéle, though, agreed to pay Amisphere $10 a plate, according to a contract that was, curiously, signed a year after the meals program ended. In seeking to free its assets, Yéle has argued in Haitian court that it contracted with Mr. Pierre and that he must have subcontracted the work. Mr. Pierre could not be reached for comment.

For her part, Ms. Bien-Aimé said: “I fulfilled my end of the deal, and I don’t know why they won’t fulfill theirs. Wyclef raised millions and millions of dollars. Where is the money?”

In its relief operation, Yéle operated outside the coordination system set up by other nongovernment groups; it did not want to be burdened by rules and meetings, Mr. Locke said in a 2010 interview.

Other organizations focused on providing concrete services like sanitation or health care.

Yéle chose to work more broadly than deeply. It supplied food, water and supplies to what it said were dozens of tent camps. Julie Schindall, then spokeswoman for Oxfam America, called it a “dump and run strategy.” Mr. Penn told The New York Times in 2010, “My impression is that Yéle is at the service of Wyclef Jean and his reputation.”

Yéle’s biggest program was a job corps, through which it said it hired thousands of Haitians for a month each to clean streets and canals. Some aid experts believe such interventions worthy while others criticize them for not providing lasting employment or, with street-cleaning, lasting results. Yéle’s program cost more than $5 million, with only about half of that going to the laborers.

This program, too, left trouble in its wake. Last week, the Haitian police jailed a Yéle employee at the behest of a garbage hauling company that says it is owed more than $100,000 for two months’ work, Mr. Locke said in an e-mail to friends.

While Yéle describes its support of the Jean et Marie Orphanage as one of its most significant accomplishments, the help provided was not really what the orphanage wanted, its director says.

After the orphanage was flattened by the earthquake, another group, the Global Orphan Project, quickly replaced it with a simple concrete structure. The day that the children moved back in, a Yéle team stumbled upon them, the director, Diaoly Estimé, said.

“They offered to rebuild the orphanage and I said it was already rebuilt but we needed help to survive,” she said. “They started giving us $3,000 a month for food. Also, Mr. Clef’s wife came with a soccer star and police officers and journalists and gave the children presents.”

Then in the summer of 2010, Yéle cut off the stipend entirely, for a while sending the orphanage a weekly basket of vegetables and rice instead. The children were always hungry and crying, said the Rev. Jean Claude Dorcelly, whose Haitian-American Rock Apostolic Church in Spring Valley, N.Y., began scraping together money to help.

At the same time, Yéle pushed forward with its building plan. Mr. Jean’s brother-in-law got a $154,000 contract to construct a second floor atop the dormitory and a second building with a cafeteria and classrooms.

The vegetables came through another Yéle program that ended abruptly. A peasant farmers’ collective was paid $600,000 to provide weekly deliveries of produce for a year to what the charity’s Web site identifies as 35 orphanages.

Asked for a list of the beneficiaries, the Rev. Occide Cico Jean, who runs the collective, provided one with 19 orphanages. Nine were visited or reached by phone. Only four said they had received weekly baskets for a full year. One, Village of Hope, which has 29 severely disabled children, who were being fed gruel for supper during a recent visit, said it had never received a single basket.

Derek Q. Johnson, then the chief executive of Yéle, was skeptical of the program and canceled it. The Rev. Jean, in protest, sent an angry e-mail to Yéle: “Are we Haitians, once again, going to show ourselves incapable of carrying a project to conclusion?” he asked. “Are we going to do this Haitian-style — ‘Wash our hands and dry them in the dirt?’ ”

2 thoughts on “WYCLEF IS, WAS AND ALWAYS WILL BE A BUM WHO STOLE FROM HIS PEOPLE IN TIMES OF NEED”