Larry Forsyth has long known there is plenty of fresh water in Haiti, and that it was just a matter of getting to it so it could be used to help Haitians grow their own food. 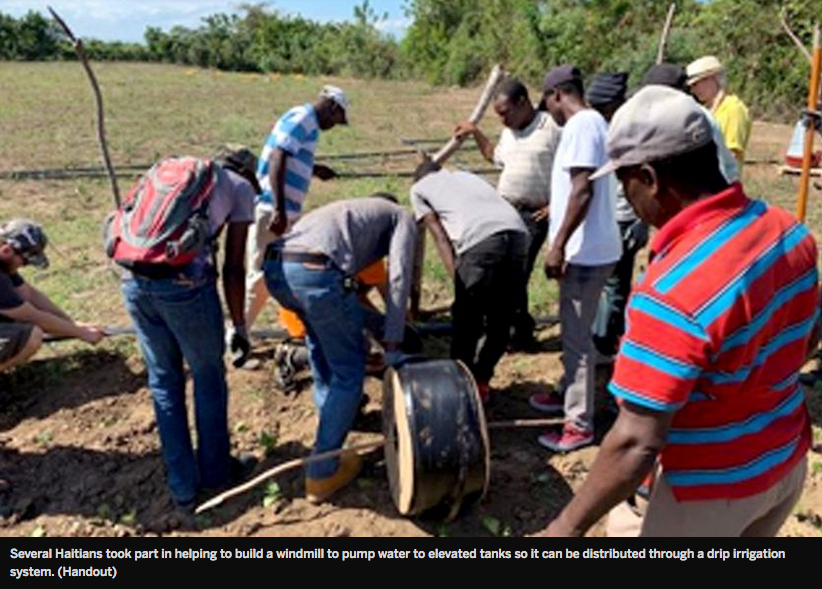 Larry Forsyth has long known there is plenty of fresh water in Haiti, and that it was just a matter of getting to it so it could be used to help Haitians grow their own food.

The pastor of Joshua Ministries in Chatham was part of a mission trip to Haiti in late January. He and others helped build the first drip irrigation system powered by a windmill.

Forsyth said wells have been drilled in the past, using generators to operate the pumps.

He said Haitians could grow great crops, but couldn’t always get the fuel necessary to run the generator that powers the pump to access the water.

Having an agricultural background, Forsyth got the idea for Joshua Ministry’s latest project while travelling to the Brigden Fair. It was there that he spied an old windmill.

Taking a closer look, he found the windmill was being used to water cattle.

“It had to be 100 years old and it was still working,” Forsyth said.

He wondered if the same simple technology could also be used in Haiti to pump water to an elevated holding tank for a drip irrigation system.

“The beauty of drip irrigation is you only need five-pounds pressure at the tape or 10-pounds (pressure) if you have issues of elevation (on the land),” he said.

When Forsyth found it could work, a few more trips were made to Haiti to plan for the project, which included forming a co-operative of local people, including members of a church, to work on the project, as well as getting a new well drilled, thanks to sponsorship from the Rotary Club of Essex.

Forsyth said the “miracles” came with the unexpected help that was received along the way.

He said Heartnut Grove Inc. in Mount Brydges was contacted to purchase the drip irrigation supplies. When details of the project were discussed, he said the company sent a crew of volunteers to help out.

“They worked hard,” he said “They were helping everywhere, not just putting the drip irrigation in.”

Forsyth said the windmill was purchased from O’Brock Windmills in Ohio, which arranged to have everything flown and delivered to Haiti by Missionary Flights International out of Fort Pierce, Florida.

He said after two years of securing funds, planning and organizing, a new and functioning system was built within in a week. He added this included working from dawn to dusk, fabricating the tower and getting an elevated holding tank 20 feet off the ground.

Forsyth said the morning the Chatham-based group were leaving Haiti, there wasn’t the slightest breeze to make the windmill turn.

Knowing their bus was leaving soon, he said they figured they would have to call to find out how the new system was working.

“Then we looked up and all of sudden the thing was turning, there was a little gust of wind, and it started pumping,” Forsyth said. “It was an incredible moment.”

He said the goal is to have Haitians learn to lead their own drip irrigation projects.

The beauty of these projects, he said, is the way the wealth is shared through the co-operative The church gets 10 per cent of what’s sold at market to look after social needs. The farmer gets his share as well as those working for him.

“Part of the vision was to create a micro-economic environment, so people can make a little bit of money and grow healthy food,” Forsyth said.

He acknowledges this is puzzling to many people.

Citing the millions of people who live in Haiti, Forsyth said, “Maybe we can help this town of 5,000. It seems like a poor attempt, but it’s really worth doing.”

More information about the work Joshua Ministries is doing in Haiti can be found online at www.joshuaministrieschatham.com.