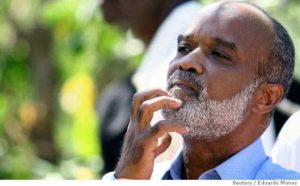 A 50-year-old pop star with a penchant for provocative stage antics seems, at first, just what Haiti doesn’t need as its next president. But Michel Martelly, who won last month’s runoff election with an estimated 67% of the vote, may have more to offer his country than meets the eye. At the very least, he is not connected to the establishment politicians who have looted the hapless nation for the last two decades.

If Mr. Martelly does nothing in the next four years except live up to his campaign pledge to get the earthquake recovery process going, and if he is able to employ an honest cabinet, history is likely to judge him well. If he gets the right advisers—and that’s a big if with Bill Clinton and the U.S. Agency for International Development playing outsized roles in his country—he might accomplish even more.

Before anyone writes off Mr. Martelly for his résumé, consider that at least one past president looked far better on paper. Jean Bertrand Aristide had a seemingly virtuous past as a Catholic priest who advocated for the poor. We all know how that turned out. Mr. Aristide was filled with anger and envy—and each time he got to power, in 1991, in 1994, and again in 2001, he tore his country apart. His successor, and one-time ally, René Preval, didn’t have the courage or will to challenge the mafia-style government that he inherited in 1996 and again in 2006. When a 7.0 earthquake hit Haiti in January 2010, the country found itself bereft of leadership.

Mr. Martelly didn’t finish college, and he seems to have made his share of missteps in his personal life, such as his admitted drug use. No one would mistake him for the messiah that Haitians took Mr. Aristide for when he came on the scene in the late 1980s. Yet the president-elect is not without admirable qualities, and his successful music business suggests management skills that may be useful in his new job.

In a telephone interview during his campaign for the runoff, I asked Mr. Martelly how one goes from entertainment entrepreneur to Haitian president. He argued that it wasn’t going to be such a big transition. It is true, he told me, that he was a musician for 22 years. But he pointed out that he has also been involved in humanitarian work in Haiti over the years. Most recently, he and his wife Sophia founded the nonprofit Rose et Blanc foundation in 2008 to do charitable work.

This experience heightened his awareness of government ineptitude in the aftermath of the earthquake. As time went on, Mr. Martelly said, he “realized it was a problem of leadership. Millions of dollars were coming to Haiti and we were seeing no results.”

This wasn’t, he argued, because the wrong actions were taken. Rather, he said, it was because “no one has been interested in doing anything” from inside the government. On the subject of relocating victims, he said, “You have the land and people waiting to move” but the state has been seemingly paralyzed. Though the plan for many months has been to relocate the victims to temporary shelter, Mr. Martelly told me that he would like to see them go directly from the tent cities “to permanent, prefabricated homes.”

I asked Mr. Martelly if he would continue the long Haitian tradition of keeping Haitian expatriates out of positions of power. He told me he doesn’t much care about where the human capital to run his government will come from. “It’s a matter of competence,” he told me. “We are going to look for honest and willing people.”

When I pointed out that even with the best human capital, he will inherit a mess, he agreed. But he quickly added that he would begin by “governing by example,” and that would mean restoring the independence of the country’s judicial branch. He pointed out that the Supreme Court currently is short three judges, including its president. The net effect of this has been that “no one in the country [has been able to] appeal a decision made by the [executive].”

If Mr. Martelly is serious about this, it could mark a turning point for a nation that has known little but arbitrary, all-powerful government supported by dubious meddling from abroad. A controversial industrial park slated for construction in the northern Caracol Valley, funded in part with money from the InterAmerican Development Bank and backed by Hillary Clinton’s State Department, makes the point.

Critics charge that the government has chosen to build it on good farmland, which is rare in Haiti, instead of a site more in need of development. If Haiti had property rights and a functioning price system, the market would determine the highest value for this and all other real estate. Instead, central planners are in charge.

Haiti cannot develop without property rights and the rule of law. Mr. Martelly’s job is to break this news to the Haitian political establishment, Mr. Clinton and the aid bureaucrats who are accustomed to doing business the old-fashioned way.