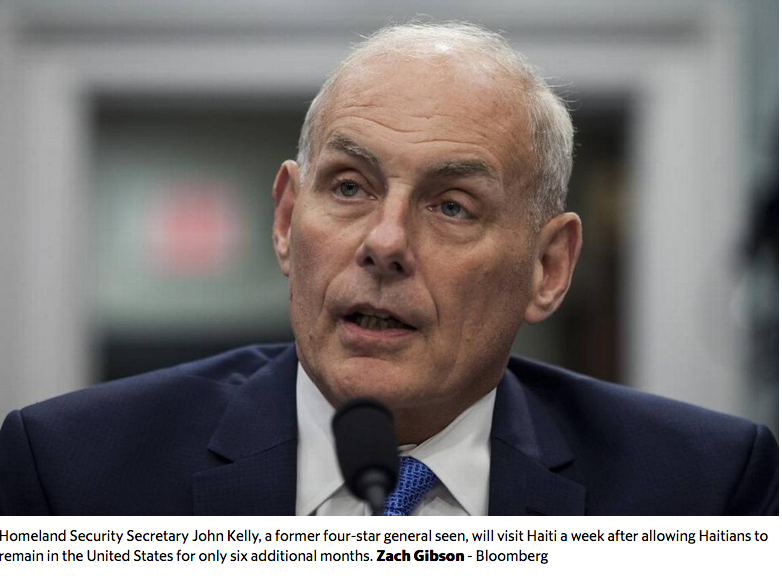 A week after the Department of Homeland Security gave thousands of Haitians just six more months to legally work and live in the United States, casting doubt on their fate after January, the department’s chief is headed to Haiti.

But don’t expect DHS Secretary John Kelly to visit any post-earthquake tent cities, cholera treatment centers, or the hurricane-ravaged and famine-plagued southern coast after he arrives in Port-au-Prince Wednesday afternoon.

Kelly’s visit, according to sources, will last just four hours, and he will remain on the grounds of the earthquake-destroyed National Palace. There, he will meet with Haitian President Jovenel Moïse and other senior government officials, and the head of the soon departing United Nations Stabilization Mission in Haiti, Sandra Honoré.

“That’s horrible,” said U.S. Rep. Frederica Wilson, D-Fla., who wrote to Kelly on May 22 inviting him to accompany her to Haiti after he opted to renew the Temporary Protected Status or TPS program for only an additional six months rather than the 18 months she and others had requested.

“We asked him to go to Haiti and survey the conditions on the ground so that he can make an assessment as to Haiti’s ability to absorb deportees back to Haiti,” she said. “This defeats the purpose.”

Steven Forester, a Miami-based immigration advocate with the Institute for Justice & Democracy in Haiti, agreed: “Learning about the extraordinary blows Haitians have suffered requires an open mind and more than a quick ‘in-and-out’ visit to the palace.”

Homeland Security, in announcing Kelly’s upcoming visit, made no mention of TPS, which will now be extended until Jan. 22 rather than expiring on July 22. In a press release, DHS said that Kelly will “discuss international cooperation and issues related to repatriation, as well as efforts to build Haiti’s maritime law enforcement capacity, and to encourage cooperation between the Dominican Republic and Haiti’s nascent border security unit.”

Some in Haiti hope the discussion will also include the U.S.’ deportations without any paperwork or formal agreement between the two nations. In September, the U.S. resumed deportations to Haiti, and so far, more than 4,000 Haitians have arrived, advocates say. On the same day as Kelly’s visit, a $1 million deportee reintegration program — run by the International Organization for Migration and funded by the U.S. Agency for International Development — will end, leaving deportees to fend for themselves after arriving in Haiti.

Some organizations see the visit as a chance to change Kelly’s views. On Tuesday, 38 humanitarian and development organizations wrote to Kelly with a list of individuals and organizations he should talk to about conditions in Haiti. Those conditions, the letter said, “have a bearing on the ability of Haitians currently in the United States to safely return home.”

Read the letter to DHS Secretary John Kelly as he prepares to head to Haiti.

Among the suggested stops for Kelly: the post-earthquake slum of Canaan, which grew out of the United States’ insistence that Haitian government find suitable land to relocate homeless quake victims.

The failed earthquake recovery effort was once described by a shelter and development expert as an example of “when Hollywood and the Pentagon get involved in humanitarian aid” — a reference to actor Sean Penn, who got involved in Haiti’s recovery after the 2010 earthquake, and Lt. Gen. Ken Keen, commander of the joint U.S. military operation in the early days of the emergency response. Both pushed the U.S. position.

“While it is now recognized as a formal settlement, it is a town in name only,” the letter said of the community with an estimated population of between 54,000 and 250,000 living in makeshift shacks and concrete homes. “Tens of thousands of people live there in extremely difficult conditions, with precarious and hazardous infrastructure, and little access to major employment centers.”

Also suggested are visits to other post-earthquake tent cities, the Grand’ Anse to see the impact of the worst storm to hit Haiti in 52 years, and the Haitian-Dominican border, where thousands of individuals of Haitian ancestry cross daily after being retroactively stripped of their citizenship by the Dominican Republic four years ago. And, the group said, he should witness first-hand the effects of cholera, which has killed 9,700, a 56 percent increase in deaths over the past year.

“I am concerned that Secretary Kelly is traveling to Haiti but will spend no time meeting with experts on the ground and touring parts of the country that remain devastated by the 2010 earthquake and the 2016 hurricane,” said Tom Jawetz, vice president for immigration policy at the Center for American Progress. “Over the next six months, he and his staff have an opportunity to continue to examine the important role that TPS is playing in the rebuilding of Haiti and I hope Secretary Kelly is able to return to the island to see things firsthand.”

Wilson said her invitation for Kelly to travel with her to Haiti still stands. She hopes, she said, Haitian officials “tell him the truth” as to why Haiti isn’t prepared to handle the return of nearly 60,000 people. Still, she’s concerned that his four-hour visit is little more than “smoke and mirrors.”

“You don’t survey the conditions of a country by going from the airport to the palace, stay there for four hours, and then get back on an airplane and come back to the United States of America,” Wilson said. “It’s unconscionable and not fair.”

Designated by the Department of Homeland Security, Temporary Protected Status or TPS is provided to nationals of countries when the conditions in the country make return dangerous or impossible. This is usually devastating natural disasters or civil strife. In certain circumstances, it is also designated when the country is unable to handle the return of its nationals adequately. The designation is given by the Department of Homeland Security.

What does it allow?

Protection from deportation. An individual with TPS can live and work legally in the United States as long as they have renewed their status. They can also obtain travel authorization.

There are 10 countries including Haiti, El Salvador, Honduras and Nicaragua. Liberia’s designation, due to Ebola, recently expired.

What TPS recipients should do in next six months

If you have Temporary Protected Status, or TPS, lawyers say you should consider:

A one-on-one meeting with an immigration lawyer to review immigration history and options.

Honest conversations with neighbors and relatives about custody arrangements.

Getting a Power of Attorney document.

Come up with a contingency plan regardless of whether the status is extended for six months, or 18 months as advocates have requested.