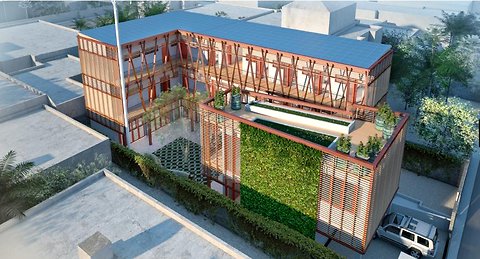 HOK HOK’s design for Project Haiti, an orphanage for Port-au-Prince, was inspired by the way kapok trees store water and maximize available resources.

As neighborhoods devastated by Hurricane Sandy begin drafting plans for reconstruction, some progressive architects and urban planners are arguing that the emerging science of biomimicry offers a way forward. The notion is that the next generation of waterfront designs could draw inspiration from the intricate ways that plants and animals have adapted to their situations over hundreds of millions of years.

Kapok trees, honeycombs and mangroves are just a few of the naturally occurring features or processes that have informed the designs of buildings from Haiti to South Korea to New York City in recent years.

“Nature is a dynamic entity, and we should be trying to design our buildings, our landscape and our cities to recognize that,” said Thomas Knittel, a biomimicry specialist at the prominent Seattle-based architecture firm HOK.

In Port-au-Prince, the Haitian capital, for example, the rainy season and humid climate have been factored into the design of HOK’s Project Haiti, an orphanage that is to replace one ruined by the 2010 earthquake. Construction is to begin this spring, and the building should be completed later this year.

“The big difference is this project really needs to live within limits and boundaries, as nature does,” Knittel said. “People are subject to this by necessity in Haiti.”

In his design, Mr. Knittel overcame the scarcity of local wood by taking advantage of readily available concrete and bamboo.

Taking climate and habitat into consideration defies much of what Mr. Knittel said he absorbed in architecture school. When building near water, for example, he and other students focused on ways to keep water away from, or guide it away from, the structure. Biomimicry takes a different tack, following nature’s lead rather than battling it.

“Nature does the exact opposite: it slows water, it sinks it, and it stores it,” Mr. Knittel said.

For Project Haiti, the slowing, sinking and storing start on the roof. Plants receive rainwater, slowing the flow, before the water is filtered and funneled down to a container garden on the lower roof for irrigation. Meanwhile, rooftop photovoltaic panels absorb solar energy for the building and power streetlights and public charging stations, so residents are less reliant on the unstable Port-au-Prince power grid.

Honeycombs have meanwhile informed the design of HOK’s commercial tower in New Songdo City, South Korea. To achieve the twisting look the clients desired but prevent the tower from buckling in heavy winds, HOK designed a structure with supporting walls that stagger out and upward from the center.

Like the hexagonal parts of a honeycomb, the supporting walls hug the core like puzzle pieces, creating a balanced and secure structure with no wasted space.

Yet merely imitating nature’s designs will not suffice. Biomimicry involves understanding the science underlying an adaptive structure or strategy before applying it.

“Nature has found its way over 2.8 billion years to not only survive, but thrive on this planet,” said Amy Coffman Philips, founder of the B-Collaborative, a network of certified biomimicry specialists who lead workshops for designers and architects. “If we’re finding holes in the resiliency, then maybe we can look to alternative sources of inspiration.”

And plants’ cooperation techniques could influence coastal architecture. Peatland plants withstand unpredictable water levels from snow melt and heavy rains by clumping together into stilt-like rafts. Similarly, red mangrove trees crowd together to withstand the heavy waves of their coastal habitat, absorbing wave energy in their roots and forming a natural breakwater that protects shoreline. 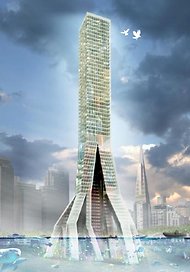 HWKN Architects Mangrove trees, whose gnarled roots hoist their trunks and branches safely above water, inspired the design of Skygrove, a concept for a vertical office park above rising water.

Mangrove trees often grow in swamps and marshes, but gnarled roots hoist their trunks and branches safely above water. Those roots inspired the design of Skygrove, a vertical office park concept created by the New York City architecture firm HWKN. The building would divide into root-like branches that lift it safely above rising water. Each branch is independent, housing offices and providing its own energy.

The concept won first place in the Museum of Modern Art’s “Rising Currents” competition and exhibition of 2010, which challenged architects to design buildings capable of adapting to rising seas.

Matthew Hoffman, a project manager for HWKN, said his firm had not determined which materials to use for Skygrove. The experimental nature of the project has even led to some to question its feasibility for some locales.

Daniel Williams, a practicing architect in Seattle who specializes in sustainable waterfront design, noted that Hurricanes Andrew and Katrina obliterated nearby mangrove forests in Florida. The trees’ adaptive strategies, like their tendency to clump together and utilize all of the land around them, could be more worthy of emulation than the shape of their roots, he suggsted.

“We should look at the ecology and botany and how the tree is functioning, rather than just copying its form,” Mr. Williams said.

When it comes to functioning optimally despite extreme weather, the octopus could be the ultimate model. Rafe Sagarin, a marine ecologist and the author of “Learning from the Octopus,” said a physical readiness to adapt, combined with a thoughtful approach to sudden change, gives the cephalopod its edge.

“The octopus has this really strong, powerful brain,” Dr. Sagarin said. “It’s thoughtful and can plan but also adapts in an automatic way.”

The octopus’ combination of quick and measured thinking could help guide coastal cities’ approach to climate change, he said. While government must respond quickly in emergency weather situations, people on the ground can provide the other half of the octopus approach: carefully considered, long-term solutions.

“All these amazing minds out there aren’t activated for certain problems,” Dr. Sagarin said. “But if you can reactivate them, you get the aspects of adaptable systems.”

In other words, the more people who are invested in creating to solutions to climate change, the better. But first, the public needs access to detailed information and hazard maps depicting sea-level rise.

“So people can see, here’s what we expect is going to happen in Manhattan or the Hudson River Valley,” Dr. Sagarin said.