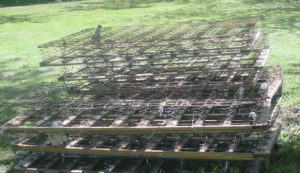 NORFOLK, Va. (AP) — When the USS Enterprise returns home from its final deployment, one of the first items that will be stripped from the aircraft carrier will be the thousands of mattresses its sailors have worn out over the past few years.

But unlike other ships the Navy has decommissioned, these mattresses won’t be heading to a local landfill following the Dec. 1 inactivation.

The Navy will send the mattresses to a company in South Carolina as part of a pilot program to break the mattresses down and recycle their springs and foam for other uses. The Navy says paying Pamplico, S.C.-based Nine Lives Mattress Recycling to take the Enterprise’s mattresses off their hands is about $12,000 cheaper than paying for them to go to a local landfill.

“It had to be cheaper, even if it’s greener, in order for us to want to do business,” said Gregory Jeanguenat, Naval Station Norfolk’s Integrated Solid Waste and Recycling Site manager.

The Enterprise will be the third Navy ship to have its mattresses recycled as part of the program, which was inspired by similar programs in the Army. The amphibious transport dock USS Mesa Verde and the aircraft carrier USS Abraham Lincoln had mattresses ready for disposal removed in the past few weeks. Removing the Lincoln’s mattresses was a particular accomplishment because aircraft carriers are the Navy’s largest ships, with more than 6,000 sailors on board.

In all, 13,000 shipboard mattresses are being recycled under the pilot program, saving more than 100,000 cubic feet of space in a landfill.

“It’s my pride and joy. I’m absolutely excited that this happened,” Jeanguenat said. “It’s the largest chunk of mattress recycling in the US military.”

Jeanguenat hopes the program will expand to other ships, barracks and Navy hotels in the area in the near future. In southeast Virginia, which is home to the world’s largest naval base, the Navy buys about 25,000 new mattresses a year.

“This is one of the greatest projects that will affect our solid waste program and recycling program — ever. And the largest mass amount of stuff to be moved in one fell swoop rather than worrying about white paper or plastic or something individual. This is a huge amount of product,” Jeanguenat said.

Navy mattresses are replaced as needed, but they typically have an eight-year life span, according to Tom Kreidel, a spokesman for Naval Facilities Engineering Command Mid-Atlantic.

Keeping the old mattresses from going into landfills is the single easiest way for the Navy to reduce its footprint in them, Jeangenat said.

“There’s no reason a mattress should go to a landfill. They’re not really giving out permits for new landfills that easily, so it seems like everybody would see the importance of removing anything from a landfill that can be reused,” said Ralph Began, the owner of Nine Lives Mattress Recycling.

Began said the springs will be melted down for scrap metal and that the mattresses foam will be used for carpet pads. While the contract to recycle aircraft carrier mattresses is new for him, he said recycling military mattresses has long been a part of his six-year old business.

He said one of his original customers is the U.S. Marine Corps Recruit Depot at Parris Island, S.C. He said he typically recycles several thousand mattresses from the Marines’ basic training site each year, and has also recycled Army mattresses from Fort Jackson, S.C., outside of Columbia.