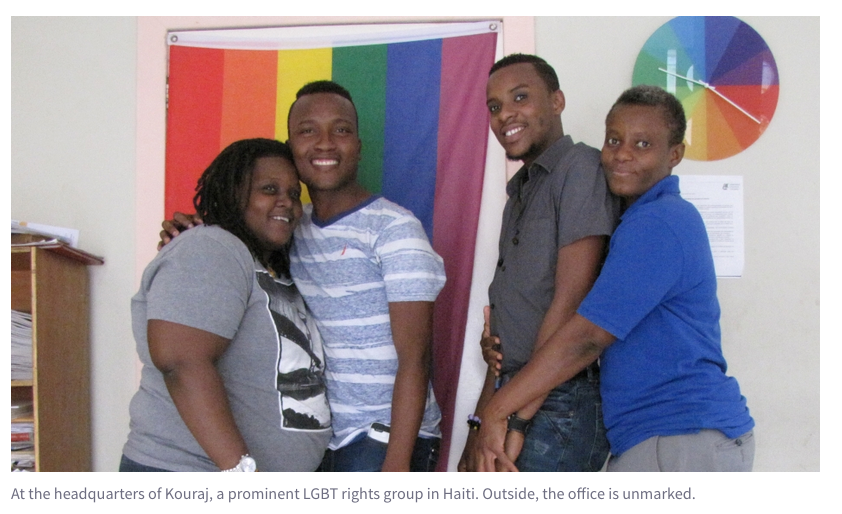 The name of Haiti’s most prominent LGBT rights organization is Kouraj (Haitian Creole for courage) — with good reason. The group’s headquarters have moved three times after attacks.

The current office is on a side street, unmarked, with a plainclothes security guard out front. But inside there’s no question where you are. The reception area is decorated with a rainbow flag and a rainbow clock.

Behind the front desk sits a young transgender woman with a warm smile. Smitchyna Charles, a Kouraj receptionist and human rights trainer, tells me that last year life in Haiti became more dangerous for her community. That’s because of two bills that passed Haiti’s Senate over the summer. One included “proven homosexuals” in a list of people (alongside pedophiles and child pornographers) to be deprived of a certificate of moral good standing — something required for acceptance into some universities and often an expected part of job applications.

The other bill called for banning “demonstrations of support for homosexuality,” and would make so much as attending a same-sex wedding punishable by three years in prison and a fine of almost $8,000 — never mind that gay marriage is already not legal in Haiti.

Neither measure has even gotten a vote in the lower house of parliament, and yet the proposed bills are already having an impact, Charles says, because people have the impression that they became law.

“All the rumors, all the national media say there’s a law that passed against gays and lesbians in the country,” Charles says. “And people hearing that react by looking out for groups of gay people to attack.”

Charles says members of Kouraj and others in the LGBT community were subjected to intimidation and attacks after the Senate vote.

Of course, the bills didn’t come out of nowhere. Homophobia has long been a problem in Haiti, and Kouraj staff say it’s only gotten worse since the 2010 earthquake.

One reason for this, according to Chachou Jean Francois, a transgender group leader and youth educator at Kouraj, is the arrival of foreign evangelicals imposing their views.

“They can’t do this in their home countries, where human rights are respected,” Francois says, “so they come to underdeveloped countries where they make people believe homosexuality is something abominable.”

After the earthquake, many of the organizations that rushed in to help were Christian evangelical groups, and it’s widely believed in Haiti’s LGBT community that Christian fundamentalism spread, along with anti-LGBT sentiment. Charlot Jeudy, Kouraj’s founding president, says many gay Haitians adhere to the Vodun religion because they see it as far more accepting.

But besides what he calls “Christian extremism,” Jeudy says there’s another reason anti-LGBT sentiment seems more out in the open since the earthquake.

So in 2011, Jeudy created Kouraj. And in 2016, the organization planned a four-day LGBT film festival called Massimadi, from Creole terms for gay and lesbian. But before the festival could start, a senator condemned it, death threats poured in and the government shut it down.

Public outcry over the planned event helped inspire the introduction of the anti-LGBT legislation last year. 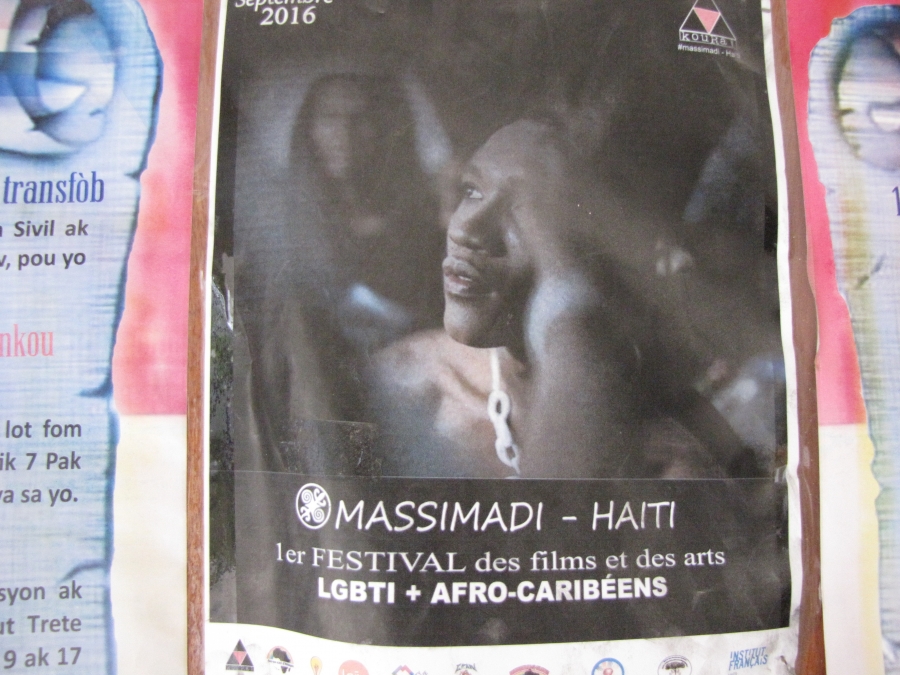 A poster for the Massimadi LGBT Film Festival. It was cancelled following protests and death threats.

Anderson Estimphil was one of the Massimadi organizers. She is a transgender woman and a devout Christian, and her experiences exemplify today’s struggle. She said in a recent Canadian documentary that she tried to take her own life after the earthquake because she’d been led to believe her sexual orientation had contributed to the earthquake, which killed her uncle. She was also driven from home.

But Estimphil became a prominent member of the LGBT community here, with Massimadi promotional material featuring a gauzy picture of her face. Today, at Kouraj, she speaks confidently about her role in the fight for LGBT rights and of her dream to someday transition, and marry.

Pastors and legislators who supported last summer’s legislation did not return calls for comment. But I found plenty of voices of support just walking around the Champs de Mars, Port-au-Prince’s central park.

A student named Lovely Jean Baptiste says it’s common for gays and lesbians here to be beaten up, sometimes even killed, because, as she puts it, “they shouldn’t be doing that.” Asked if she is okay with violence against gay people, she replied, “Yes!”

It’s hard to imagine that right here on the Champs de Mars. Fifteen years ago a film called “Of Men and Gods,” about gay men and Vodun, was screened.

Co-director Laurence Magloire says the screening was a pivotal moment in her life. “When I showed ‘Of Men and Gods’ in 2003 on the Champs de Mars to an audience of 3,000 to 4,000 people,” she says, “I saw Haitians looking at themselves on the screen and wanting to have more. At the end, people were yelling, ‘Show the movie again! We are the lesbians! We want to see more! We want to see more of us! We want to know more about us!’”

Magloire wanted to show the film again for its 15th anniversary. But, she says, “I had a second thought, and I said, ‘Maybe not, because I don’t want to have all those guys come in and throw rocks at us and break my screen and my projector, and the people watching the film.’ But it would have been great.”

Magloire returned home to Haiti, after many years in Canada, shortly before making this film, and she says it was the screening on the Champs de Mars that clarified her mission in Haiti: “To show Haitians their image on the screen.” She believed that if people can see who they really are, “they can move forward.”

LGBT rights advocates are trying to strike the right balance of being seen and heard while being careful.

Kouraj staffer Dominique Saint Vil says he advises young LGBT people to take precautions, but at the same time he sees progress as more and more people bravely come out.

“Before, they wouldn’t stand against their parents and say, ‘I’m a homosexual and I’m allowed to live my life,’ or ‘I’m a homosexual and I’m allowed to go to church.’ These are really important steps,” Saint Vil says. “Of course, Haiti has a lot of hate towards the homosexual, but a lot of people are starting to see us as they should see us — as human beings, as citizens of the country.”

And he adds that change has come about because of groups like Kouraj.

When a Kouraj member was recently threatened with arrest for wearing a Massimadi film festival T-shirt, Saint Vil says the officer let the guy in the T-shirt go because he asserted that he knew his rights and that Kouraj would defend him.

This story was produced in association with Round Earth Media, which is supporting the next generation of global journalists.

COMMENT: HAITIAN-TRUTH.ORG
Give me a break!
Haiti has had 2 gay Prime Ministers, Madame Pierre Louis, and Max Bellerive, without a national disaster.
If the Gay community wasn’t so aggressive in forcing their views onto the community, there would be no problem. Homosexuality has always been a part of Haitian culture.
Like a bunch of BORN AGAIN CHRISTIANS we see the group pressing, pressing, pressing when no pressure is required.