By Lucy Rodgers
BBC News
The devastating earthquakes that hit China on 12 May 2008, Italy on 6 April 2009 and Haiti one month ago all measured above 6.0 and took many lives. But why was the human cost so much greater for Haiti? 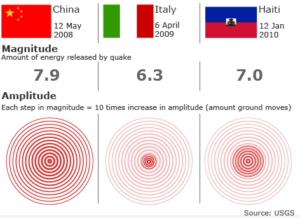 When Pete Garratt, Red Cross head of disaster relief, received an alert on 12 January indicating a large quake had hit Haiti near its capital Port-au-Prince, he instantly recognised the seriousness of the emergency.

“I knew that meant deaths and injuries,” he says.

The reason he predicted the effects of the quake would be so grave, Mr Garratt explains, is that there are a number of critical factors, learned through years of experience, that contribute to the scale of devastation following such big shifts of the Earth’s crust.

One is, perhaps obviously, the size of the quake , but also how near it is to the surface, the density of the population near its epicentre, as well as whether there are any heavily urbanised areas nearby. These all indicate a higher death toll – and were all features of the Haiti quake.

But poverty also plays its role, Mr Garratt explains, as it exacerbates a country’s or region’s vulnerability to such disasters.

In places such as Haiti, where 72.1% of the population live on less than $2 a day, and in cities like Port-au-Prince, where many are housed in poor and densely-packed shantytowns and badly-constructed buildings, the devastation is always expected to be greater.

“These countries have less money to put into buildings and there is less governance ensuring building codes are followed,” Mr Garratt explains.

“Corruption can also be an issue and so, even when there are government structures to ensure building codes are followed, there are bribes that enable people to take short cuts.

“Put simply – there are the technical elements of the earthquake and then the social elements on top of that.”

Therefore, the fact that the Haiti quake hit close to a poorly-constructed, large urban area was crucial in reducing people’s chances of survival.

“In Italy it was one town, and a few surrounding villages – not a large urban area. And in China, although it affected a large area and big towns, it was not a city,” says Mr Garratt.

“In Haiti, in a big city like Port-au-Prince, with so many structures coming down, this means more rubble will kill more people.”

The resulting scale of destruction – of infrastructure, of government and other official organisations – also made it much more difficult to respond once the earthquake hit and had an impact on the number of people rescued from the rubble.

Haiti, unlike China and Italy, simply did not have the resources to act quickly, and it took time to get outside help in.

“The Chinese government was able to mobilise a very military response. Although some parts were hard to reach initially,” says Mr Garratt. “The resources they had were very impressive.

“The problem in Haiti was the airport was only half-functioning and you had one road route that took a day to traverse.”

The dense urban environment in Port-au-Prince also made it a difficult place for rescue teams to work once they were there, he says.

“You could say that the resulting congestion in large cities meant there was less room for manoeuvre.

“But there were an enormous number of search and rescue teams there and considering the difficulties getting there, they did a good job.”

However, the statistics on rescues may not necessarily reflect the true number of victims freed in and around Port-au-Prince, he warns.

“The majority of people are pulled out of the rubble by their neighbours.”

The Red Cross, which had teams dealing with the aftermath of the China, Italy and Haiti earthquakes, believes aid agencies learn lessons from every disaster, although each – like Haiti – poses fresh questions.

“We are always getting better,” says Mr Garratt. “But what is a challenge is that there is always something new.”

One of the problems in Port-au-Prince is the lack of space, he adds, as well as a constantly shifting and mobile population.

The task now for such organisations is to help the people of Haiti get back on their feet, given the inevitable crippling economic cost of such a quake.

And as the Red Cross and others admit, their success in responding to the Haiti emergency will be judged not just on the first weeks of emergency aid, but on whether communities are left more resilient and better equipped when the next disaster strikes.