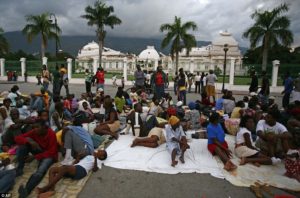 PORT-AU-PRINCE–They jockey for power. Cronyism is rampant, as is anti-democratic behaviour. And accusations of corruption fly.

This may sound like Haiti’s famously dysfunctional national government, but it also describes the tent city spiralling around the main plaza at Canapé Vert, a once lush part of eastern Port-au-Prince.

Jethro Guillaume, a thoughtful university accounting student who chooses his words carefully, explains how he and a number of other young men recently formed a committee to help organize the relative disorder of the camp.

The only problem? Make your way through the maze of tarps and charcoal cookers to the other side of the plaza and you’ll find a group that says it is the camp’s committee. And this group will say the other is trying to gain power so it can siphon off the aid traffic for itself.

As the hundreds of makeshift tent camps become more entrenched in the parks, clearings and roadway medians of Port-au-Prince, so, too, has their political sociology become more complicated.

The hierarchies and rivalries and complaints on the ground are beginning to reflect the way politics has long been done in Haiti, where politics is a tough business.

In the early days after the Jan. 12 earthquake, camps formed spontaneously around the city, notably at Champs-de-Mars park near the National Palace.

The International Organization for Migration (IOM) says there are now 415 sites hosting 551,000 people. Sizes range from a few dozen to several thousand families.

They are naturally evolving. The Star spent the day at three camps in Port-au-Prince and found relative calm, though when it rains, people say the misery can be measured in the screams of children and in the eyes of those who run for cover, only to realize there is none.

People sit on concrete or dirt. Trying to bring a semblance of comfort, some have hauled in mattresses; most have not. Amazingly, an enterprising young man named Desir Faubert has set up a TV and stereo under his tarp.

Some people have created micro-businesses, selling beans or candies. Girls get their toenails painted at an open-air beauty parlour at a camp in a former soccer pitch. A barber’s chair sits near water tanks in another.

Camp leaders emerged as Haitians realized they were on their own. No one was coming to help them. To this day, as Canapé Vert committee treasurer Robert Mathurin says, peering up the hill where President René Préval’s personal residence overlooks the city, “We don’t have a president.”

Every day, people see his car roll by, but “not once has he come here to see how the people are doing.”

Part of the cynicism comes from decades of ineffectual governance, from the Duvalier dictatorships to the bloody years under Jean-Bertrand Aristide to the endless backbiting of contemporary Haiti.

Those who took initiative in the early post-quake days often became members of camp committees, organized to direct aid and to communicate with aid agencies.

Mathurin and his colleagues were part of the Youth Sport Association of Canapé Vert before the quake, and so on Jan. 13, they started using the group’s funds to buy water from a private firm because it wasn’t coming from anywhere else. They dug holes on a boulevard nearby and built haphazard latrines.

Lately, he says, they have completed a census of families at the request of aid groups.

But Guillaume’s is quietly challenging their power, claiming credit for wiring the site for electricity and planning classes for children.

“Things have not been well organized,” he says “We are going to have staff, and things will be better.”

“This is a way to get what the aid groups are giving for themselves,” Mathurin counters.

He admits groups like Action Against Hunger and the IOM recognized the divisions and asked them to coalesce, but he reckons that’s impossible because “there are some we don’t make coalitions with because they’re not reliable.”

Camp leaders are quick to denounce the government for inaction and insist they’re doing better.

French teacher Jude Lebrun helps preside over what is probably the best-organized camp in Port-au-Prince. On the tranquil private grounds of the obliterated Brothers of Juvenat school, it’s clean, organized in blocks and trouble-free. Sub-committees take care of water, food and camp tidiness.

Cooperation is easy, Lebrun says, because everyone comes from the heavily damaged Morne Lazard neighbourhood of Petionville.

There are 1,208 people here and 151 tents or tarps, he says. His group has even instituted a tax, 25 gourdes – about 70 cents – collected from each family each Saturday, to buy gas for a generator used to power the string of lights around the camp and a TV for the children.

Lebrun says the central committee was formed from the “cream of the area.” But there was no election.

Asked whether that affects people’s view of the committee, he says nobody trusts any leader in Haiti.

So how will he win trust? “By doing what I’m doing.”

But trust is already fraying. One young woman and her father, asked what they think of the committee, said they’ve seen members keep aid for themselves and their friends. They declined to give their names because “they can kick us out.”