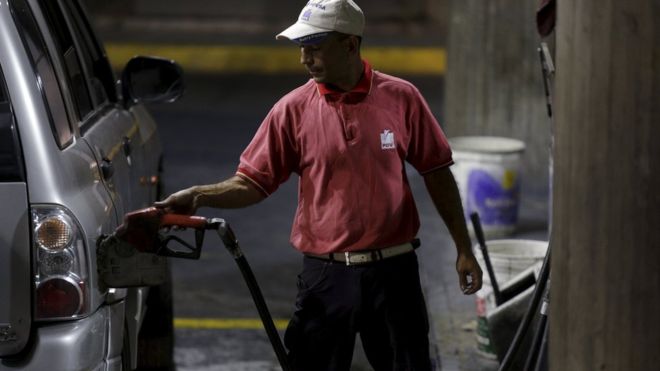 Venezuela is raising petrol prices for the first time in 20 years, although the president claims it will still be the cheapest in the world.

The cost of lower grade petrol would rise to about $0.10 a litre.

He unveiled a series measures to help ease Venezuela’s economic crisis, including devaluing the currency.

The rise in the heavily-subsidised fuel price will save $800m a year.

“Venezuela has the cheapest gasoline in the world,” Mr Maduro said in a televised address. “The cost is almost nothing.”

However, other countries, including Saudi Arabia also have extremely cheap, subsidised petrol prices.

He said the price rise was “a necessary measure, a necessary action to balance things, I take responsibility for it.”

Food and petrol price increases in 1989 sparked nationwide protests that resulted in scores of deaths, unrest that is considered to have paved the way for the late President Hugo Chavez’s rise to power.

Venezuela’s economy has been pushed to the brink by the collapse in the oil price, which accounts for about 95% of the country’s export revenues.

The economy shrank 10% last year, amid rampant inflation and shortages of some basic products,

According to the Bloomberg news agency, the state oil company Petroleos de Venezuela incurred $15.2bn in costs in 2013 to maintain Venezuela’s fuel subsidy.

Mr Maduro also announced that the government would “simplify” the complex exchange rate from Thursday, easing the protected official rate for food and medicine imports which will now operate alongside a parallel “floating” rate.

Investors have become increasingly concerned about Venezuela’s potential default on its huge debts.